Home Technology Power Will the Powerwall be a game changer for home energy?

At Self-Reliance Central we’re all about securing energy sufficiency, both as a nation and personally. The nation’s grid is a shambolic mess that regularly breaks down, is over-priced, under-maintained and due to collapse any day now. We all know how difficult it is to deal with an outage or a brown-out.

So we’re always fascinated by the latest thing in home power.  And this one comes from the brilliant and eccentric inventor, Elon Musk. His latest invention, the Powerwall, is a rechargeable lithium-ion battery product manufactured by Tesla Motors. It’s designed for home use. Although it’s currently priced at $3,000 the Powerwall sold out as soon as Musk introduced it. Because Elon Musk gave away the patents for Powerwalls as he did with Tesla cars, it’s expected that many other manufacturers will rush to market and the price will fall.

Powerwall is basically a home battery that charges using electricity generated from solar panels, or when utility rates are low, and powers your home in the evening. It also fortifies your home against power outages by providing a backup electricity supply. Automated, compact and simple to install, Powerwall offers independence from the utility grid and the security of an emergency backup. It stores electricity for domestic consumption, load shifting, and backup power. 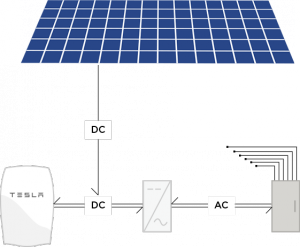 Home solar installations consist of a solar panel, an electrical inverter, and now a home battery to store surplus solar energy for later use.

The average home uses more electricity in the morning and evening than during the day when solar energy is plentiful. Without a home battery, excess solar energy is often sold to the power company and purchased back in the evening. This mismatch adds demand on power plants and increases carbon emissions. Powerwall bridges this gap between renewable energy supply and demand by making your home’s solar energy available to you when you need it.

Specs: The Powerwall has two different models using 2 different generic cell chemistries. Tesla uses proprietary technology for packaging and cooling the cells in packs with liquid coolant. The daily cycle 7 kWh battery uses nickel-manganese-cobalt chemistry and can be cycled 5,000 times.The other is a 10 kWh battery, using a nickel-cobalt-aluminum cathode like the Tesla Model S, and is for weekly or emergency use and has higher energy density but a shorter cycle life of 1000-1500 cycles. We reported on the joint-venture with Panasonic last month.

It includes a DC to DC converter to sit between a home’s existing solar panels, and the home’s existing DC to AC inverter. The Powerwall’s lithium ion battery inherits Tesla’s automotive battery technology. It’s completely automated, it installs easily and requires no maintenance.