Fishing – not just a fun summer activity! For millennia people have fished to feed their families, friends and local communities. Fresh fish grew into a massive international business.

So, we all know that in a survival situation, we can rely on fish for sustenance. We just need to know a little about what’s in the creek, river, lake or ocean where we’re going to try out our skills. And of course, we’re going to need some fishing items.

Even if you have poles and lines and all the kit, it’s a great exercise to try the wilderness way of fishing every now and again, just like the military do. Here are some very resourceful and self-reliant techniques, scavenged from a variety of sources.

To make a wooden hook, cut a piece of hardwood about 2.5 centimeters long and about 6 millimeters in diameter to form the shank. Cut a notch in one end in which to place the point. Place the point (piece of bone, wire, nail) in the notch. Hold the point in the notch and tie securely so that it does not move out of position. This is a fairly large hook. To make smaller hooks, use smaller material.

A gorge is a small shaft of wood, bone, metal, or other material. It is sharp on both ends and notched in the middle where you tie cordage. Bait the gorge by placing a piece of bait on it lengthwise. When the fish swallows the bait, it also swallows the gorge.

A stakeout is a fishing device you can use in a hostile environment. To construct a stakeout, drive two supple saplings into the bottom of the lake, pond, or stream with their tops just below the water surface. Tie a cord between them and slightly below the surface. Tie two short cords with hooks or gorges to this cord, ensuring that they cannot wrap around the poles or each other. They should also not slip along the long cord. Bait the hooks or gorges.

If a gill net is not available, you can make one using parachute suspension line or similar material. Remove the core lines from the suspension line and tie the easing between two trees. Attach several core lines to the easing by doubling them over and tying them with prusik knots or girth hitches. The length of the desired net and the size of the mesh determine the number of core lines used and the space between them. Starting at one end of the easing, tie the second and the third core

lines together using an overhand knot. Then tie the fourth and fifth, sixth and seventh, and so on, until you reach the last core line. You should now have all core lines tied in pairs with a single core line hanging at each end. Start the second row with the first core line, tie it to the second, the third to the fourth, and so on.

To keep the rows even and to regulate the size of the mesh, tie a guideline to the trees. Position the guideline on the opposite side of the net you are working on. Move the guideline down after completing each row. The lines will always hang in pairs and you always tie a cord from one pair to a cord from an adjoining pair. Continue tying rows until the net is the desired width. Thread a suspension line easing along the bottom of the net to strengthen it.

You may trap fish using several methods. Fish baskets are one method. You construct them by lashing several sticks together with vines into a funnel shape. You close the top, leaving a hole large enough for the fish to swim through.

You can also use traps to catch saltwater fish, as schools regularly approach the shore with the incoming tide and often move parallel to the shore. Pick a location at high tide and build the trap at low tide. On rocky shores, use natural rock pools. On coral islands, use natural pools on the surface of reefs by blocking the openings as the tide recedes. On sandy shores, use sandbars and the ditches they enclose. Build the trap as a low stone wall extending outward into the water and forming an angle with the shore.

large and plentiful, you can spear them. To make a spear, cut a long, straight sapling. Sharpen the end to a point or attach a knife, jagged piece of bone, or sharpened metal. You can also make a spear by splitting the shaft a few inches down from the end and inserting a piece of wood to act as a spreader. You then sharpen the two separated halves to points. To spear fish, find an area where fish either gather or where there is a fish run. Place the spear point into the water and slowly move it toward the fish. Then, with a sudden push, impale the fish on the stream bottom. Do not try to lift the fish with the spear, as it with probably slip off and you will lose it; hold the spear with one hand and grab and hold the fish with the other. Do not throw the spear, especially if the point is a knife. You cannot afford to lose a knife in a survival situation. Be alert to the problems caused by light refracti on when looking at objects in the water.

At night, in an area with a good fish density, you can use a light to attract fish. Then, armed with a machete or similar weapon, you can gather fish using the back side of the blade to strike them. Do not use the sharp side as you will cut them in two pieces and end up losing some of the fish.

Another way to catch fish is by using poison. Poison works quickly. It allows you to remain concealed while it takes effect. It also enables you to catch several fish at one time. When using fish poison, be sure to gather all of the affected fish, because many dead fish floating downstream could arouse suspicion. Some plants that grow in warm regions of the world contain rotenone, a substance that stuns or kills cold-blooded animals but does not harm persons who eat the animals. The best place to use rotenone, or rotenone-producing plants, is in ponds or the headwaiters of small streams containing fish. Rotenone works quickly on fish in water 21 degrees C (70 degrees F) or above. The fish rise helplessly to the surface. It works slowly in water 10 to 21 degrees C (50 to 70 degrees F) and is ineffective in water below 10 degrees C (50 degrees F). The following plants, used as indicated, will stun or kill fish: 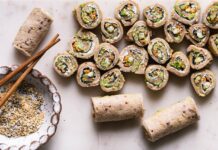 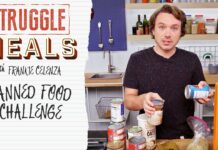 Getting Creative with Canned Food