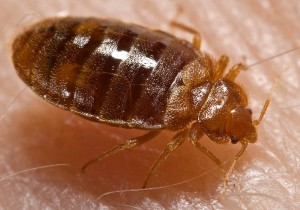 Bed bugs have made recently made an unwelcome resurgence in the United States.

Bed bugs are tiny, brown, flat, oval-shaped insects that feed on the blood of humans and may live for weeks without a feeding.

They are called bed bugs because they most often live in your bed, but can also be found in upholstered furniture, behind wallpaper and in cracks and crevices.
To avoid bed bugs when traveling:
• Treat the exterior of your luggage with an appropriately labeled
insect repellent, before you leave home.
• Place your luggage on a luggage stand, away from beds and
upholstered furniture and keep your clothing in your suitcase on
the stand
• Avoid bringing personal items, such as pillows and blankets
• Check the mattress and box spring at the corners and edges for spotting, which is a sign of bed bugs

To prevent bringing bedbugs home with you after traveling:
• Avoid placing luggage on your bed
• Wash and dry clothing before storing

Symptoms & Treatment
Most people do not have a reaction to bites but the signs and symptoms can appear from minutes to days after the initial bite. There will be localized itching and reddish-colored skin welts or bumps either in clusters or line. Typically, these skin lesions will go away after one to two weeks.

If the bites start to itch use an over-the-counter antihistamine pill or cream such as diphenhydramine (Benadryl). Hot a hot washcloth directly to the affected area to get some relief from the itching. Don’t scratch! Use a hydrocortisone cream like Cortizone to receive the itching. If you scratch and get a bacterial skin infection use an antibiotic cream like Neosporin.

Some people are allergic to the bites and may develop one or more of these symptoms:

Getting rid of them
Eradication of bed bugs frequently requires a combination of nonpesticide approaches and the occasional use of pesticides.

Mechanical approaches, such as vacuuming up the insects and heat treating or wrapping mattresses, are effective. A combination of heat and drying treatments is most effective.

An hour at a temperature of 45 °C (113 °F) or over, or two hours at less than −17 °C (1 °F) kills them; a domestic clothes drier or steam kills bedbugs. A study has found 100% mortality rates for bed bugs exposed to temperatures greater than 122 Fahrenheit for more than 2 minutes.

Starving them is difficult as they can survive without eating for 100 to 300 days, depending on temperature. For public health reasons, individuals are encouraged to call a professional pest control service to eradicate bed bugs in a home, rather than attempting to do it themselves, particularly if they live in a multi-family building.

The EPA has developed a search tool that can help you choose an EPA-registered bed bug product that meets your needs. Click here to fill out the questionnaire that will reveal which product you need.