I wrote yesterday that governments want to eliminate cash in order to make it easier to squeeze more money from taxpayers.

But that’s not the only reason why politicians are interested in banning paper money and coins.

They also are worried that paper money inhibits the government’s ability to “stimulate” the economy with artificially low interest rates.

Simply stated, they’ve already pushed interest rates close to zero and haven’t gotten the desired effect of more growth, so the thinking in official circles is that if you could implement negative interest rates, people could be pushed to be good little Keynesians because any money they have in their accounts would be losing value.

Here’s some of what Kenneth Rogoff, a professor at Harvard and a former economist at the International Monetary Fund, wrote for the U.K.-based Financial Times.

Getting rid of physical currency and replacing it with electronic money would…eliminate the zero bound on policy interest rates that has handcuffed central banks since the financial crisis. At present, if central banks try setting rates too far below zero, people will start bailing out into cash.

And here are some passages from an editorial that also was published in the FT.

…authorities would do well to consider the arguments for phasing out their use as another “barbarous relic”…even a little physical currency can cause a lot of distortion to the economic system. The existence of cash — a bearer instrument with a zero interest rate — limits central banks’ ability to stimulate a depressed economy.

Meanwhile, Bloomberg reports that the Willem Buiter of Citi (the same guy who endorsed military attacks on low-tax jurisdictions) supports the elimination of cash.

Citi’s Willem Buiter looks at this problem, which is known as the effective lower bound (ELB) on nominal interest rates. …the ELB only exists at all due to the existence of cash, which is a bearer instrument that pays zero nominal rates. Why have your money on deposit at a negative rate that reduces your wealth when you can have it in cash and suffer no reduction? Cash therefore gives people an easy and effective way of avoiding negative nominal rates. …Buiter’s solution to cash’s ability to allow people to avoid negative deposit rates is to abolish cash altogether.

So are they right? Should cash be abolished so central bankers and governments have more power to manipulate the economy?

There’s a lot of opposition from very sensible people, particularly in the United Kingdom where the idea of banning cash is viewed as a more serious threat.

Allister Heath of the U.K.-based Telegraph worries that governments would engage in more mischief if a nation got rid of cash.

Many of our leading figures are preparing to give up on sound money. The intervention I’m most concerned about is Bank of England chief economist Andrew Haldane’s call for a 4pc inflation target, as well as his desire to abolish cash, embrace a purely electronic currency and thus make it easier for the Bank to impose substantially negative interest rates… Imagine that banks imposed -4pc interest rates on savings today: everybody would pull cash out and stuff it under their mattresses. But if all cash were digital, they would be trapped and forced to hand over their money. …all spending would become subject to the surveillance state, dramatically eroding individual liberty. …Money is already too loose – turning on the taps would merely further fuel bubbles at home and abroad.

Also writing for the Telegraph, Matthew Lynn expresses reservations about this trend.

As for negative interest rates, do we really want those? Or have we concluded that central bankers are doing more harm than good with their attempts to manipulate the economy? …a banknote is an incredibly efficient way to handle small transactions. It is costless, immediate, flexible, no one ever needs a password, it can’t be hacked, and the system doesn’t ever crash. More importantly, cash is about freedom. There are surely limits to the control over society we wish to hand over to governments and central banks? You don’t need to be a fully paid-up libertarian to question whether…we really want the banks and the state to know every single detail of what we are spending our money on and where. It is easy to surrender that freedom – but it will be a lot harder to get back.

Merryn Somerset Webb, a business writer from the U.K., is properly concerned about the economic implications of a society with no cash.

…at the beginning of the financial crisis, there was much talk about financial repression — the ways in which policymakers would seek to control the use of our money to deal with out-of-control public debt. …We’ve seen capital controls in the periphery of the eurozone… Interest rates everywhere have been at or below inflation for seven years — and negative interest rates are now snaking their nasty way around Europe… This makes debt interest cheap for governments…and it and forces once-prudent savers to move their money into the kind of risky assets that are supposed to drive growth (and tax receipts).

Amen. She’s right that low interest rates are good news for governments and not very good news for people in the productive sector.

Last but not least, Chris Giles wrote a column for the FT and made one final point that is very much worth sharing.

Mr Haldane’s proposal to ban cash has all the hallmarks of a public official confusing what is convenient for the central bank with what is in the public interest.

Moreover, the option to engage in Keynesian monetary policy also gives politicians an excuse to avoid the reforms that actually would boost economic performance. Indeed, it’s quite likely that an easy-money policy exacerbates the problems caused by bad fiscal and regulatory policy.

Let’s conclude by noting that maybe the right approach isn’t to give politicians and central bankers more control over money, but rather to reduce government’s control over money. That’s one of the arguments I made in this video I narrated for the Center for Freedom and Prosperity.

P.S. By the way, Ryan McKaken at the Mises Institute identifies a third reason why politicians would prefer a cash-free society.

…the elimination of physical cash makes it easier for the state to keep track of private persons, and it assists central banks in efforts to punish saving and expand the money supply by implementing negative interest rate schemes. A third advantage of the elimination of physical cash would be to more easily control people and potential dissidents through the freezing of their bank accounts.

Excellent point. We’ve already seen how asset forfeiture allows governments to steal people’s bank accounts without any conviction of wrongdoing. Imagine the damage politicians and bureaucrats could do if they had even more control over our money. 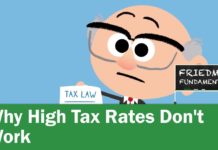