Some critics immediately decided this meant I favored a blank check for the Pentagon, even though I specifically stated that “I’m very sympathetic to the proposition that trillions of dollars that have been misspent on foreign adventurism this century.”

Indeed, I get especially upset about military boondoggles precisely because national defense is a legitimate function of government.

I want money being spent in ways that will minimize the threat of an attack on the United States, not on the basis of padding jobs in a particular politician’s hometown or in response to clever lobbying by a defense contractor.

Unfortunately, wasting money is what government does best. And it happens at the Pentagon just as often as elsewhere in the federal behemoth.

Let’s look at a recent exposé about Pentagon profligacy in the Washington Post.

The Pentagon has buried an internal study that exposed $125 billion in administrative waste in its business operations amid fears Congress would use the findings as an excuse to slash the defense budget… Pentagon leaders had requested the study to help make their enormous back-office bureaucracy more efficient and reinvest any savings in combat power. But after the project documented far more wasteful spending than expected, senior defense officials moved swiftly to kill it by discrediting and suppressing the results. …Based on reams of personnel and cost data, their report revealed for the first time that the Pentagon was spending almost a quarter of its $580 billion budget on overhead and core business operations such as accounting, human resources, logistics and property management. …the Defense Department was paying a staggering number of people — 1,014,000 contractors, civilians and uniformed personnel — to fill back-office jobs far from the front lines. That workforce supports 1.3 million troops on active duty, the fewest since 1940.

Here’s a rather sobering chart from the story. Predictably, bureaucrats in the military tried to cover up evidence of waste and inefficiency.

…some Pentagon leaders said they fretted that by spotlighting so much waste, the study would undermine their repeated public assertions that years of budget austerity had left the armed forces starved of funds. Instead of providing more money, they said, they worried Congress and the White House might decide to cut deeper. So the plan was killed. The Pentagon imposed secrecy restrictions on the data making up the study, which ensured no one could replicate the findings. A 77-page summary report that had been made public was removed from a Pentagon website.

Here’s a final excerpt from the story. The “no one REALLY knows” quote is rather revealing.

“We will never be as efficient as a commercial organization,” Work said. “We’re the largest bureaucracy in the world. There’s going to be some inherent inefficiencies in that.” …while the Defense Department was “the world’s largest corporate enterprise,” it had never “rigorously measured” the “cost-effectiveness, speed, agility or quality” of its business operations. Nor did the Pentagon have even a remotely accurate idea of what it was paying for those operations… McKinsey hazarded a guess: anywhere between $75 billion and $100 billion a year, or between 15 and 20 percent of the Pentagon’s annual expenses. “No one REALLY knows,” the memo added. …the average administrative job at the Pentagon was costing taxpayers more than $200,000, including salary and benefits.

Let’s close with some blurbs from other stories.

Starting with some specific examples of waste from a recent story by U.S. News & World Report.

The Special Inspector General for Afghan Reconstruction has uncovered scandal after scandal involving U.S. aid to that country, including the creation of private villas for a small number of personnel working for a Pentagon economic development initiative and a series of costly facilities that were never or barely used. An analysis by ProPublica puts the price tag for wasteful and misguided expenditures in Afghanistan at $17 billion, a figure that is higher than the GDP of 80 nations. …A Politico report on the Pentagon’s $44 billion Defense Logistics Agency notes that it spent over $7 billion on unneeded equipment. …overspending on routine items – such as the Army’s recent expenditure of $8,000 on a gear worth $500 – continues.

Let’s also not forget that the Pentagon is quite capable of being just as incompetent as other bureaucracies.

Such as forgetting to change the oil on a ship.

The USS Fort Worth, a Navy littoral combat ship, has suffered extensive gear damage while docked at a port in Singapore. …According to reports, the crew failed to use sufficient lube oil, leading to excessively high temperatures on the gears. Debris also found its way into the lubrication system, which also contributed to failure, Defense News reports. The crew did not follow standard operating procedures.

And accidentally allowing a missile to get shipped to the hellhole of communist Cuba.

An inert U.S. Hellfire missile sent to Europe for training purposes was wrongly shipped from there to Cuba in 2014, 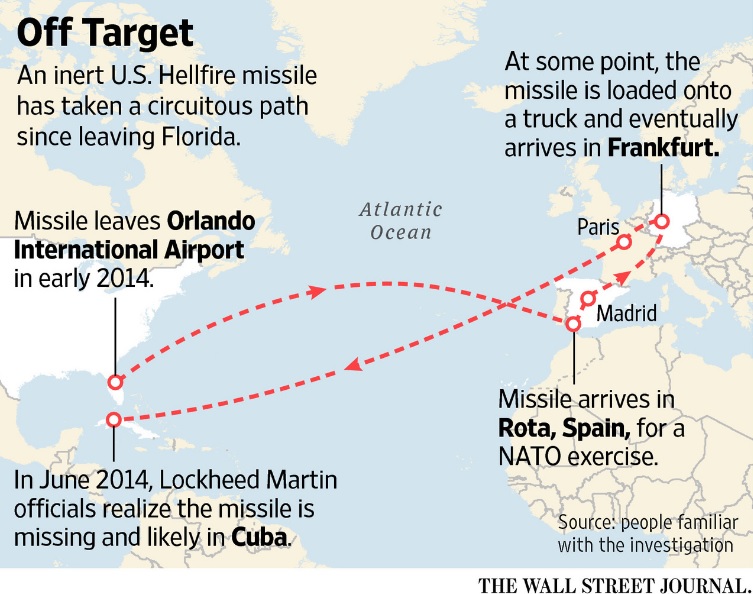 said people familiar with the matter, a loss of sensitive military technology that ranks among the worst-known incidents of its kind. …officials worry that Cuba could share the sensors and targeting technology inside it with nations like China, North Korea or Russia. …“Did someone take a bribe to send it somewhere else? Was it an intelligence operation, or just a series of mistakes? That’s what we’ve been trying to figure out,” said one U.S. official. …At some point, officials loading the first flight realized the missile it expected to be loading onto the aircraft wasn’t among the cargo, the government official said. After tracing the cargo, officials realized that the missile had been loaded onto a truck operated by Air France, which took the missile to Charles de Gaulle Airport in Paris. There, it was loaded onto a “mixed pallet” of cargo and placed on an Air France flight. By the time the freight-forwarding firm in Madrid tracked down the missile, it was on the Air France flight, headed to Havana.

And let’s not forget about the jaw-dropping absurdity of an intelligence chief who isn’t allowed to…um…see intelligence.

For more than two years, the Navy’s intelligence chief has been stuck with a major handicap: He’s not allowed to know any secrets. Vice Adm. Ted “Twig” Branch has been barred from reading, seeing or hearing classified information since November 2013, when the Navy learned from the Justice Department that his name had surfaced in a giant corruption investigation involving a foreign defense contractor and scores of Navy personnel. …More than 800 days later, neither Branch nor Loveless has been charged. But neither has been cleared, either. Their access to classified information remains blocked. Although the Navy transferred Loveless to a slightly less sensitive post, it kept Branch in charge of its intelligence division. That has resulted in an awkward arrangement, akin to sending a warship into battle with its skipper stuck onshore. …Some critics have questioned how smart it is for the Navy to retain an intelligence chief with such limitations, for so long, especially at a time when the Pentagon is confronted by crises in the Middle East, the South China Sea, the Korean Peninsula and other hotspots.

The bottom line is that any bureaucracy is going to waste money. And the bureaucrats in any department will always be tempted to care first and foremost about their salaries and benefits rather than the underlying mission.

So I’m not expecting or demanding perfection, regardless of whether the department has a worthwhile mission or (in most cases) shouldn’t even exist. But I do want constant vigilance, criticism, and budgetary pressure so that there’s at least a slightly greater chance that money won’t be squandered.

Making 3-D firearms off the internet. 2SA or irresponsible and illegal?