The Bureau of Land Management agent in charge of the Bundy Cliven raid is accused of widespread misconduct and ethics violations, threatening the government’s criminal trial against 30 Americans who stood with him.

Now the federal judge hearing that case is ordering the government to confirm the charges, so that defense attorneys can disqualify him as a witness.

Chief United States District Judge Gloria Navarro dropped the hammer on federal prosecutors, ordering them to reveal the agent identified in a BLM Office of Inspector General report as having committed serious misconduct and ethics violations.

“The OIG Report details several violations of federal ethics regulations, misuse of government property, misuse of a government position, and ‘a lack of candor when interviewed,’ ” Navarro wrote in her ruling. “At a minimum, (defendants) may use this alleged misconduct on cross-examination to impeach (the agent).”

While the agent is not named, the details of the report indicate he is Dan Love, BLM’s special agent in charge for Nevada and Utah between 2002 and 2015. He was also the BLM official in charge of the raid on Bundy’s ranch.

The report, published two weeks ago, reveals a high-ranking BLM agent manipulated Federal hiring rules to give a job to a personal friend who was not qualified for the job.

It also details how the official used his authority to get tickets for his girlfriend and family to the 2015 “Burning Man” festival. He also demanded personal escorts for himself and his guests, as well as free ice cream and a $1.6 million “luxury compound” for himself and BLM staff.

The official then stuck Burning Man with a $2.8 million bill.

The report finds the official also bragged about how he used his position to destroy people, and that he would end the career of the investigators looking into complaints about his misconduct.

The report also finds the official “displayed a lack of candor when interviewed and tried to influence an employee’s comments prior to an interview.”

Investigators claim the official told one subordinate who was cooperating with investigators “If you don’t side with me, grenades are going to go off and you’ll get hit.”

The official told another BLM staffer “If you’re not on
my ship, you’re going to sink…So I suggest you get on my ship.”

Prosecutors call that “perjury” and “subornation of perjury,” which are Federal crimes — and indicate Love would lie under oath in a courtroom.

Defense attorneys have argued Love abused his power to wrongfully escalate the situation between Cliven and the BLM — an argument mirrored by the conduct revealed in the report.

The Deep State FBI knew there were no Trump contacts with Russian intel in Jan. 2017 but kept the investigation going. 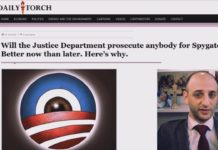