I’m normally a big fan of shutting down the government and I’ve tried to convince timid lawmakers that shutdown fights can be worthwhile.

The bottom line is that nothing really bad happens when there’s a shutdown (notwithstanding petty efforts by bureaucrats) for the simple reasons that only “non-essential” parts of the bureaucracy actually get closed. In other words, a government shutdown in all cases is simply a partial shutdown.

And since I don’t favor any funding of non-essential functions, I view a partial shutdown as a good start. 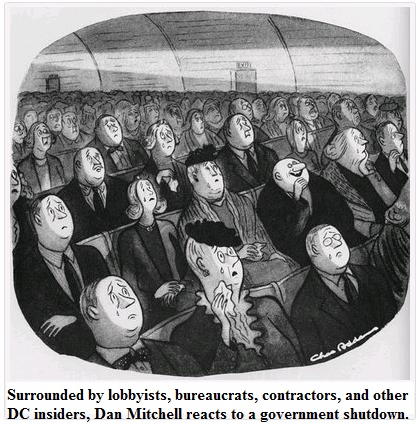 Indeed, while the various interest groups in DC hyperventilate about supposed disaster, I experience a feeling of joy and serenity (as illustrated by this modified cartoon, which originally was altered to show my reaction to sequestration).

That’s the point I made in the second half of this recent interview on Fox Business.

I’m not the only person who likes the idea of a partial shutdown.

Writing for the Resurgent, Erick Erickson explains how a shutdown fight would be valuable.

And Larry Kudlow had a similar message in a column for National Review back in 2015.

…sometimes you have to make a point. Send a message. Show voters what you really believe. Take a stand. …Most of the Beltway media will blame Republicans. Democrats will blame Republicans. And GOP pundits will blame Republicans. Political death, they will say. Really? …during the Reagan-O’Neill era, most of the shutdowns were budget focused. Reagan wanted less spending; the Democrats wanted more. …The Reagan-O’Neill-era shutdowns were short, and in most of them Reagan prevailed. Meanwhile, the Reagan recovery flourished, the Republicans held the Senate (until 1986), and the Gipper was reelected in a landslide in 1984. Going back to the Obamacare-related shutdown of 2013, a bit more than a year later the Republicans swept the Senate and gained an even larger majority in the House. …shutdowns are a cumbersome way to make a point. …But perhaps Republican leadership in both Houses might think of this: There are too many deals and not enough principles, beliefs, and clear messaging.

Having now provided all this evidence in favor of government shutdowns, you would think I’m excited about the possibility that there will be a partial shutdown this Saturday when a temporary funding bill expires.

Unfortunately, that’s not the case. I view shutdown as a means to an end. I want those fights to occur in hopes that there will be reforms that shrink the overall burden of government spending.

In this case, though, the shutdown fight largely revolves around President Trump’s request for money to build part of a wall between Mexico and the United States. Some people think that’s a good idea and others think it’s a bad idea, but the one thing I can say with certainty is that it’s not a money-saving idea. 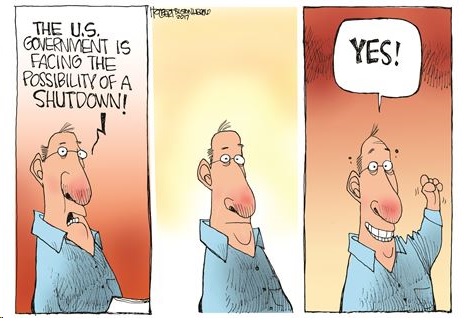 Even if Trump wanted to finance the wall by reducing outlays in other parts of the budget, the net result would not be smaller government.

The bottom line is that even though I almost always cheer for a government shutdown, I’ll be sitting on the sidelines for this fight.

But if Trump and congressional Republicans at some point decide to fight for much-needed spending restraint (a naive hope, I realize), then I’ll be the first to cheer if that battle leads to a shutdown.