During the Obamacare bill-signing ceremony, Vice President Biden had a “hot mic” incident when he was overheard telling Obama that “this is a big f***ing deal.”

And he was telling the truth. It was a big deal (albeit a wrong deal) from a fiscal perspective and a health perspective. And it also was a very costly deal for Democrats, costing them the House in 2010 and the Senate in 2014. But it definitely was consequential.

Well, there’s another “big f***ing deal” in Washington, and it’s what just happened to the state and local tax deduction. It wasn’t totally repealed, as I would have preferred, but there’s now going to be a $10,000 limit on the amount of state and local taxes that can be deducted.

I’ve already explained why this is going to reverberate around the nation, putting pressure on governors and state legislators for better tax policy, and I augment that argument in this clip from a recent interview with Trish Regan. 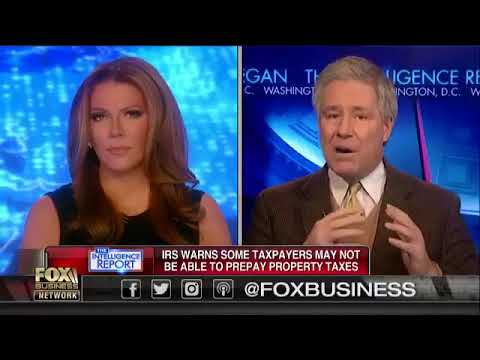 The bottom line is that high-tax states no longer will be able to jack up taxes, using federal deductibility to spread some of the burden to low-tax states.

Let’s look at what this means, starting with a superb column in today’s Wall Street Journal by Alfredo Ortiz.

The great American migration out of high-tax states like New York and Illinois may be about to accelerate. The tax reform enacted last month caps the deduction for state and local taxes, known as SALT, at $10,000.

…between July 1, 2016, and July 1, 2017, …high-tax states like New York, New Jersey, Connecticut, Illinois and Rhode Island either lost residents or stagnated. …When people move, they take their money with them. The five high-tax states listed above have lost more than $200 billion of combined adjusted gross income since 1992… In contrast, Nevada, Washington, Florida and Texas gained roughly the same amount. If politicians in high-tax states want to prevent this migration from becoming a stampede, they will have to deliver fiscal discipline.

New Jersey’s Gov.-elect Phil Murphy campaigned on a promise to impose a “millionaires’ tax.” But the Democratic president of the state Senate, Steve Sweeney, said in November that New Jersey needs to “hit the pause button” because “we can’t afford to lose thousands of people.” His next words could have come from a Republican: “You know, 1% of the people in the state of New Jersey pay about 42% of its tax base. And you know, they can leave.” New York City Mayor Bill de Blasio may need to rethink his proposed millionaires’ tax. George Sweeting, deputy director of the city’s Independent Budget Office, told Politico in November that eliminating the SALT deduction would “make it a tougher challenge if the city or the state wanted to raise their taxes.” New York state Comptroller Thomas DiNapoli added: “If you lose that deductibility, I worry about more middle-class families leaving.” …the limit on the SALT deduction is a gift that will keep on giving. In the years to come it will spur additional tax cuts and forestall tax increases at the state and local level.

Though the politicians from high-tax states are definitely whining about the new system.

The Governor of New Jersey is even fantasizing about a lawsuit to reverse reform.

Murphy, a Democrat, said he has spoken with leadership in New York and California and with legal scholars about doing “whatever it takes”…

Asked if that included a joint lawsuit with other states, Murphy said “emphatically, yes.” …Murphy said. “This is a complete and utter outrage. And I don’t know how else to say it. We ain’t gonna stand for it.”

Here’s a story from New York Times that warmed my heart last month.

…while Mr. Cuomo and his counterparts from California and New Jersey seemed dead-certain about the tax bill’s intent

— Mr. Brown called it “evil in the extreme” — there were still an array of questions about how states would respond. None of the three Democrats offered concrete plans on what action their states might take.

They haven’t offered any concrete plans because the only sensible policy – lower tax rates and streamlined government – is anathema to politicians who like buying votes with other people’s money.

California will be hard-hit, but a columnist for the L.A. Times correctly observes tax reform will serve as a much-need wake-up call for state lawmakers.

…let’s be intellectually honest. There’s no credible justification for the federal government subsidizing California’s highest-in-the-nation state income tax — or, for that matter, any local levy like the property tax.

Why should federal tax money from people in other states be spent on partially rebating Californians for their state and local tax payments? Some of those states don’t even have their own income tax, including Nevada and Washington. Neither do Texas and Florida. …federal subsidies just encourage the high-tax states to rake in more money and spend it. And they numb the states’ taxpayers. …Republican state Sen. Jeff Stone of Temecula put it this way after Trump unveiled his proposal last week: “For years, the Democrats who raise our taxes in California have said, ‘Don’t worry. The increase won’t matter all that much because tax increases are deductible.’” Trump’s plan, Stone continued, “seems to finally force states to be transparent about how much they actually tax their own residents.”

He also makes a very wise point about the built-in instability of California’s class-warfare system – similar to a point I made years ago.

Our archaic system is way too volatile. The nonpartisan Legislative Analyst’s Office reported last week that income tax revenue is five times as volatile as personal income itself. The “unpredictable revenue swings complicate budgetary planning and contributed to the state’s boom-and-bust budgeting of the 2000s,” the analyst wrote. During the recession in 2008, for example, a 3.7% dip in the California economy resulted in a 23% nosedive in state revenue. The revenue stream has become unreliable because it depends too heavily on high-income earners, especially their capital gains. During an economic downturn, capital gains go bust and revenue slows to a trickle. In 2015, the top 1% of California earners paid about 48% of the total state income tax while drawing 24% of the taxable income.

Let’s close with some sage analysis from Deroy Murdock.

“Taxes should hurt,” Ronald Reagan once said. He referred to withholding taxes, which empower politicians to siphon workers’ money stealthily, before it reaches their paychecks. Writing the IRS a check each month, like covering the rent, would help taxpayers feel the public sector’s true cost.

This would boost demand for tax relief and fuel scrutiny of big government. Like withholding taxes, SALT keeps high state-and-local taxes from hurting. In that sense, SALT is the opiate of the overtaxed masses. The heavy levies that liberal Democrats (and, inexcusably, some statist Republicans) impose from New York’s city hall to statehouses in Albany, Trenton, and Sacramento lack their full sting, since SALT soothes their pain. Just wait: Once social-justice warriors from Malibu to Manhattan feel the entire weight of their Democrat overlords’ yokes around their necks, they will squeal. Some will join the stampede to income-tax-free states, including Texas and Florida. …A conservative, the saying goes, is a liberal who has been mugged by reality. Dumping SALT into the Potomac should inspire a similar epiphany among the Democratic coastal elite.

He’s right. This reform could cause a political shake-up in blue states.

P.S. Since I started this column with some observations about the political consequences of Obamacare, this is a good time to mention some recent academic research about the impact of that law on the 2016 race.

We combine administrative records from the federal health care exchange with aggregate- and individual-level data on vote choice in the 2016 election. We show that personal experiences with the Affordable Care Act informed voting behavior and that these effects could have altered the election outcome in pivotal states… We also offer evidence that consumers purchasing coverage through the exchange were sensitive to premium price hikes publicized shortly before the election… Placebo tests using survey responses collected before the premium information became public suggest that these relationships are indeed causal.

Taxes Will Be a Royal Pain for Meghan and Harry

New York vs. Florida, Round #3