It’s nighttime, and you hear some noises downstairs. You come across two burly home intruders, one of whom threatens you with a screwdriver. What do you do?

If this had happened here in America, you’d be ready with your weapon, and they’d be lucky to escape with their lives.

However, this was the situation that a 78-year-old pensioner came across yesterday in Mayor Sadiq Khan’s London.

Armed only with his wits, the brave man struggled with one of the intruders when the other had gone upstairs. Turning the intruder’s weapon back on himself, the homeowner managed to stab the 38-year-old burglar with the screwdriver, bruising himself in the process. The intruder later died in hospital from the injuries sustained.

You might think the homeowner would be hailed as a hero: proving once and for all that crime is not OK, and that criminal actions have dire consequences – especially when its on your property. But this was the UK.

After the other intruder had run off, the pensioner called the police, who promptly arrived and arrested HIM. Because in the UK, your safety is just not as important as a burglar’s rights.

Local resident, Adam Lake, who lives at the end of the man’s Road, told The Guardian: “It was quite a shock this morning at 6am seeing the street cordoned off by police, though sadly not a surprise.

“While the area is lovely, there’s been a definite increase in crime over the past few months. Just recently my partner was threatened with a knife while walking our dog, and we’ve both been stopped countless times by people trying to sell us drugs, which is quite a shock given that this is a quiet suburban street.

“We’ve definitely felt less safe over the past few months and we’ve even decided to install CCTV, but at the end of the day that’s not going to protect you if someone breaks into your home.”

Residents of the area came out in support of the man, showing the lack of support for such pro-criminal law.

This story totally reaffirms the importance of our Castle Doctrine, and Stand your Ground laws. It absolutely demonstrates the wisdom of the Founding Fathers to enshrine our rights to self-defense into the Constitution. Thank God for American commonsense.

Sadly, in the UK, it seems the rights of criminals now supersede the rights of the victims of crime. Is this what the Democrats want to see in the US? 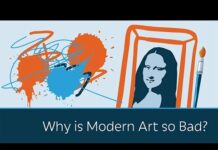 Why is modern art so bad? And why did art used to be so good?