The next time a liberal complains that the government doesn’t want to take your guns, and couldn’t even if they wanted, show them this. They did it before with your gold.

Back in 1933, FDR put out an executive order stating that everyone had to surrender their gold to the government. He claimed that “hoarding” gold was prolonging the depression, and preventing economic growth.

To claim that the government would not enact such an order again is short-sighted. The last time this was done was because of the Treasury’s bankruptcy, declared On March 9, 1933, voted into law as the Emergency Banking Act. Less than a month later, the executive order was put out requesting gold.

With an empty social security trust fund, and a national debt of $21 trillion – see the debt clock here – http://www.usdebtclock.org/, it’s not unlikely that such an act could be put into place again. After all, the March 1933 Act enshrined it in law.

If one thing’s for certain, it’s that the rights you think you have are much more vulnerable than you think.

This is why the politics of the everyday is so important, and why we can’t shy away from taking part. The legislation of today is especially vulnerable, especially concerning violations of your constitutional rights – give them a finger and they’ll take an arm. 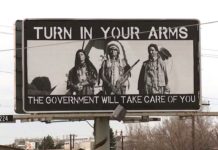 The only venomous mammal in America is small and scary! Watch it take on a snake!