One of the core principles of economics is that prices are determined by supply and demand. That includes the price of labor – i.e., the wages received by workers.

Not sure what this means? Check out this video. In this lesson, we investigate how prices are reached and how the market works like an invisible hand coordinating economic activity.

Another core principle is that taxes create distortions by reducing demand and supply. Which is why it’s not a good idea to impose high tax rates on behaviors that contribute to prosperity, such as work, saving, investment, and entrepreneurship.

That’s the theory. Now let’s consider some real-world implications of taxes on work.

Here are some excerpts from new research by the European Central Bank.

Several reforms can be enacted to reduce the unemployment rate in the euro area. Among them is a permanent reduction in the labour tax.

Typically, a decrease in labour taxes reduces labour costs to employers and increases the net take-home pay of employees, positively impacting both labour demand and labour supply. Reducing taxes on labour can contribute to increase employment and activity rates in the EA, by increasing incentives to hire, to look for, and take up, work. …In this paper we contribute to the debate on those issues by evaluating the macroeconomic effects of a fiscal reform in the EA countries.

The study look at what happens with employment-related taxes are lowered at either the employer level or the employee level.

Here are some of the specific estimates of the positive impact of lower labor taxes at the firm level.

The tax rate is reduced by almost 2 p.p. (trough level). The reduction of labour taxes paid by firms reduces the gross wage bill of firms and hence increases the value of having a worker. Workers are able to obtain part of the increase in firms’ surplus in the bargaining process, which results in a real wage increase. Nevertheless, the wage increase is not sufficient to undo the increase in the value of having a worker for firms, which leads to an increase in labour demand through vacancy posting. The number of matches increases as well and, consistently, the probability of finding a job and that of filling a vacancy increases and decreases, respectively. Employment increases (and unemployment rate decreases) by roughly 0.3 p.p. after two years and 0.4 p.p. in the medium and in the long run, respectively. …Home GDP increases by 0.5% after two years. Both consumption and investment increase. Consumption increases because of households’ larger permanent income, associated with the increase in employment, hours and production. Investment increases because firms augment physical capital to accompany the rising employment.

I’ve combined some of the key results from Figures 3 and 4, all of which show the benefits over time of lower tax rates on work (the horizontal axis is quarters, so 20 quarters equals five years). 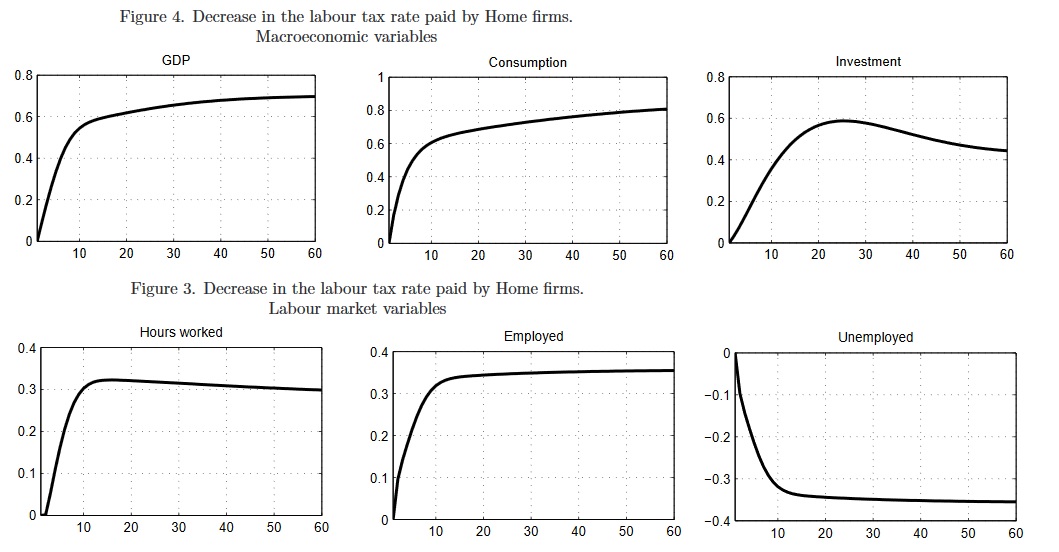 And here are the specific estimates of the good outcomes when labor tax are reduced at the household level.

Once again, let’s look at some charts showing the benefits over time of lower tax rates on workers. 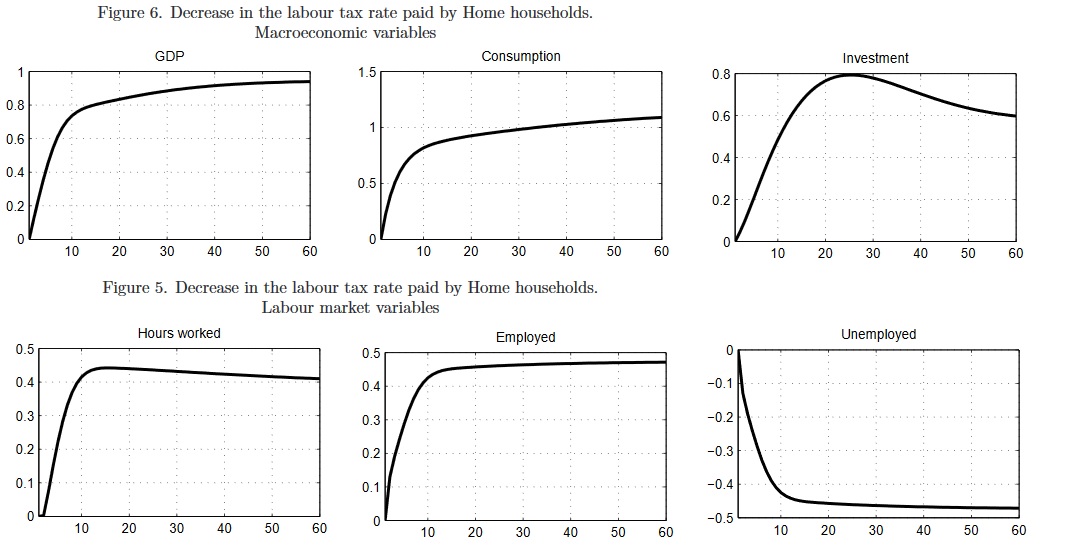 Interestingly, it appears that there are slightly better outcomes if labor taxes are reduced for workers rather than employers, but the wage numbers are better if the tax cuts take place at the business level.

I’ll take either approach, for what it’s worth.

Let’s close with one additional excerpt. The study incorporated the impact of government employment, which can have a very distorting effect on private employment given the excessive size of the bureaucracy and above-market compensation for bureaucrats.

P.S. I’m periodically asked whether I’m exaggerating when I assert that something (such as taxes distorting the supply and demand for labor) is a “core principle” in economics. But I don’t think left-leaning economists (and there are plenty) would disagree about taxes impacting supply and demand. But they presumably would quibble about the “elasticity” of supply and demand curves (in other words, how sensitive are people to changes in tax rates). Moreover, they surely would claim in some instances that any “deadweight loss” would be offset by supposed economic benefits of government spending (and pro-market people acknowledge that’s possible, at least when government is small). And, when push comes to shove, some folks on the left would openly argue that it’s okay to have less prosperity if there’s more equality.