Of all the foolish things that happen in Washington, farm subsidies are especially foolish. They are a classic example of “public choice” in action, with a handful of rich (and well-connected) producers getting big bucks by ripping off consumers and taxpayers.

The entire Department of Agriculture should be abolished. Yesterday, if possible.

If we first need a show trial, dairy subsidies could be the main example.

In what other industry would you find producers continuing to ramp up production while demand slides, and then stuffing the growing pile of surplus into warehouses, hoping the federal government will buy some of it? What makes the dairy industry different is decades of government efforts to “support” dairy farmers with various subsidy schemes. …By interfering with pricing signals, the effect of these subsidies has been to encourage production, almost regardless of market demand. …Dairy farmers say they need these programs to survive. We doubt that. Like every other industry, they’d learn to adapt to market changes. In the meantime, ask yourself this question: Why should taxpayers hand over their hard-earned money to protect other people’s jobs in a declining industry?

Here’s a one-minute video from the American Enterprise Institute that gives a quick overview of how government doesn’t allow markets to function. 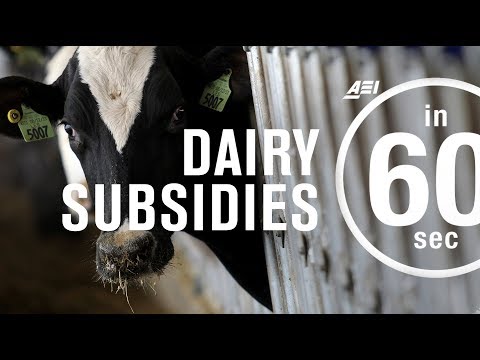 Congress currently is contemplating a new farm bill. As you might expect, there’s pressure from agriculture lobbyists for further subsidies and handouts.

Fortunately, there is also some opposition, including a recent column in the Hill.

Like spoiled milk, market-distorting dairy industry handouts need to be thrown out. …Washington doles out enormous subsidies to the largest conventional animal agriculture industries through the farm bill. …The dairy industry…

receives their millions as a straight-up handout, with no strings (or string cheese) attached. The USDA should not pick winners or losers. The government should not distort the market or continually prop up non-competitive businesses. …American taxpayers don’t need to prop up a system of socialized cheese. American consumers deserve to make their choices in a fair and equitable marketplace. This next farm bill should remedy clear instances of government waste and distortion and move beyond funneling taxpayer handouts into conventional agribusiness.

The United States is not the only nation with a corrupt and distorting system of subsidies. Similar handouts exist in Canada and have become part of NAFTA negotiations, as reported by the Wall Street Journal.

U.S. farmers are treated unfairly by the complex “supply management” system that governs Canada’s dairy market, under which the government sets milk prices and imposes quotas on domestic producers to keep supplies in check. As part of this system,

There’s no question the Canadians are guilty, but the United States is hardly in a position to throw stones.

Milk supply in the U.S. has in the past been seen as a national security interest, important to the well-being of babies and children. The U.S. government, for that reason and others, has had a long and historic involvement in domestic dairy farming, with a pricing system whose roots go back to the Great Depression. U.S. dairy imports are restricted through quotas, tariffs and licensing requirements. Prices are regulated through a complex system managed by the USDA, which sets minimum prices. When prices fall below regulated minimums, farmers can apply for federal assistance.

I suppose one silver lining to all this nonsense is that dairy farmers on each side of the border now have an incentive to calculate the subsidies received by their competitors.

…said Mr. Clark. “When it comes to farm support, the U.S. has the deepest pockets; deeper even than the European Union…” in 2015, the support granted to U.S dairy producers represented approximately C$35.02/hectolitre – the equivalent of 73% of the farmers’ marketplace revenue. …While the American dairy industry has repeatedly pointed fingers and demanded increased access to Canada’s dairy market, the extent of subsidies to the U.S. dairy industry is an 800-pound gorilla in the room.

My hope, needless to say, is that taxpayers in both nations look at these numbers and conclude that we follow the example of New Zealand and get rid of farm handouts.

Not just for dairy. Abolish the entire Department of Agriculture.

P.S. It’s a close race, but I suspect that sugar subsidies are even more corrupt than dairy subsidies.