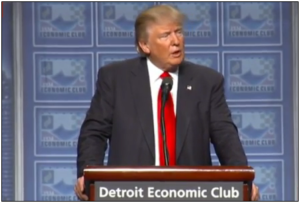 Washington D.C. economy watchers were holding their collective breaths waiting for the Labor Department’s Bureau of Labor Statistics to release its January surveys measuring individual employment and business hiring reports and the results were somewhat predictable.

A huge gain in jobs created in the private sector of 296,000 was reported by BLS, while the data from the individual household survey was skewed by the partial government shutdown.  Here is how BLS explains it: “Both the unemployment rate, at 4.0 percent, and the number of unemployed persons, at 6.5 million, edged up in January. The impact of the partial federal government shutdown contributed to the uptick in these measures. Among the unemployed, the number who reported being on temporary layoff increased by 175,000. This figure includes furloughed federal employees who were classified as unemployed on temporary layoff under the definitions used in the household survey.”

In addition, the Bureau also revises the baselines for the surveys at the start of every year, which always skews the household survey in January causing headaches for those trying to compare apples to oranges and derive meaning from the individual job report numbers.

While it may seem like a bit of a cop-out, these two factors make analysis a bit more of a crap shoot than it normally is, however, there is one key factor that can be fairly asserted.

First, the number of people employed full-time should jump dramatically on a month to month basis in the February report due in twenty-eight days.  This is because all of those furloughed government workers should be back on their full-time job when the February survey is taken baking in more than 300,000 job gains into the cake without anything else happening.

The continued private sector job creation expansion flies in the face of expectations of many who expected peak employment to have occurred.  This is particularly good news for workers as competition for labor will continue to increase making the 3.2 percent wage gains of the past year look more like a norm than an anomaly.  With inflation only running at 1.9 percent in 2018, the 1.3 percent spread between pay increases and the devaluation of the money is a real pay increase rather than one that is all eaten by the cost of living rising.

What does this mean?

At the end of 2016, there were approximately 9 million people aged 16-64 who would have been in the labor force had the participation rate remained the same, but who have simply disappeared from the workforce. When combined with an aging population, this meant that fewer and fewer Americans were working in effect to support a growing population.  The upward move in labor participation in this huge population under Trump means 1.4 million of these 16-64 year-olds entered the labor force who would not have been there if the participation rate had not grown.  This calculation is bolstered by same report data which shows that 16-64-year-olds not in the labor force dropped by 1.1 million people.  The bottom line is that Americans are re-entering the labor force reversing a 20-year trendline that was disastrous for the future.

But it also shows that there is much still to do, as approximately 7.7 million of the 16-64 group who would have been in the workforce if the participation rate was at 1997 levels are still on the sidelines, showing the room for growth within our own domestic labor force to meet the needs of the on-going job boom.

It is fair to anticipate that a combination of naturally occurring increased wages and the continued growth of career-oriented jobs in areas like the manufacturing sector, which has shown a 454,000 job gain since January 2017, will attract some of those previously sidelined back into the economy.

One important side note, it is incredible that the number of manufacturing jobs in the United States was the same in January 2009 and January 2018 at 12.56 million, while the rest of the private job numbers increased by just under 14 million over the same period.  This decade-long hollowing out of the manufacturing sector was a deliberate federal government policy combining the giant sucking sound of jobs being transferred overseas due to trade deals designed for that very purpose and the Obama administration’s regulatory regime and business taxes designed to make it unprofitable to make it in America.

Now, in Jan. 2019, it’s up to 12.8 million. It is the toxic impacts of these policies which President Trump has successfully attacked, and this is why wages are rising, jobs are plentiful and people have renewed hope that they can achieve the American dream.

Last month, China reported growth of its economy in 2018 at 6.6 percent, the lowest in 28 years. The slowdown is real enough but whether it results in a grand trade deal by the U.S. and China may depend on how much pain China is really feeling at the moment.

Is Beijing feeling the pinch?

While the talks were ongoing, Trump gave China a 90-day reprieve from the 10 percent tariff also rising to 25 percent, which was supposed to happen at the beginning of the year.

That’s the U.S. leverage. If the U.S. and China do not reach an agreement, then the tariff will more than double.

On the other hand, 2017 set a record for the trade deficit in goods with China at $377 billion according to the Census Bureau.

By the time the rest of the 2018 data comes in, the trade in goods deficit with China could exceed $410 billion. And that’s with the already enacted tariffs in place.

This raises a big question of whether the proposed tariffs are big enough to eliminate China’s cost advantage and shift production back to the U.S. So far, the initial tariffs have not made a dent in the trade deficit. Not even a scratch.

We’re not really mining rare earths that much. We still import about 78 percent of our rare earths from China. And it’s one area where Trump has been reluctant to enact tariffs against.

China and other east Asian countries continue to dominate the textile manufacturing sphere in exports to the U.S., according to data compiled by the World Bank, with the U.S. importing more than $40 billion worth in 2017 from China.

The advantage on consumer goods remains similar, with the U.S. importing more than $226.6 billion worth from China in 2017.

While U.S. manufacturers are continuing to experience a resurgence — adding 454,000 jobs since Trump took office in Jan. 2017 — still, the U.S. has a long way to go to reclaim its prior dominance in this sphere. While data for 2018 are not yet fully available, the preliminary results from Census on the trade deficit suggest China continues to expand its market share of exports to the U.S.

As trade negotiators from both countries continue to meet, a final deal will have to be ironed out by President Donald Trump and Chinese President Xi Jinping, according to Trump who tweeted on Jan. 31: “No final deal will be made until my friend President Xi, and I, meet in the near future to discuss and agree on some of the long standing and more difficult points.”

Trump articulated some of these sticking points on Jan. 31, stating, “Looking for China to open their Markets not only to Financial Services, which they are now doing, but also to our Manufacturing, Farmers and other U.S. businesses and industries. Without this a deal would be unacceptable!”

Some good news came as China agreed to import some more soybeans from the U.S., which it has been levying tariffs on. But soybeans is hardly the whole ball game. Those tariffs were retaliatory against the U.S. China lifting those tariffs in part and allowing some soybeans in merely gets you back to where you started.

But the real question might be if China has enough of an incentive to move forward with a deal. On paper, cases can be made that each side has strengths it brings to the table.

And if a deal was made, how much would it result in manufacturing shifting back to the U.S.?

Now, that doesn’t mean that there isn’t a deal to be made. Analysts for years have speculated that China’s growth rates reported are overstated. If true, then the 6.6 percent rate being reported could indicate that real pain is being felt, and that Trump’s threatened 25 percent tariff rate would make that even worse. The question is whether the U.S. will get enough in return for not enacting it.