This column is unusual.  I usually do not write about experiences around the Capitol Beltway, but the opportunity to talk to dozens of radio, television and videoblog talkers and reporters at the Conservative Political Action Conference put on by the American Conservative Union changes that norm.

Most people have seen or heard about events coming from the conference as President Donald Trump’s speech along with speeches from the Vice President and others were front and center in many of the online headlines.  As a leader in the conservative movement, I had the opportunity to be interviewed by more than thirty media outlets reaching more than 1,500 markets.  One America News viewers tell me that my comments were aired prior to the President’s speech and friends contacted me after hearing me on the Lars Larson Show, to name just two of these opportunities.

And while all that is fun, what matters is what dominated the talk: the threat of socialism.

For the first time in my life the domestic threat to our freedom has never been more real, and that is why I chose to focus on attacking the root of the socialist tree through these media outlets.

Let’s be clear, socialism is immoral.  It is immoral just as certainly as robbery is, because ultimately socialism is nothing more or less than sticking a gun in the face of someone to take the product of their labor and give it to another.

The Green New Deal makes it clear that force would be used to push compliance of various mandates. Ending the usage of internal combustion engines within ten years is a simple example of this taking.  If you currently own a non-electric vehicle, that car would be rendered worthless within a decade as they became illegal.  The closer you get to the deadline the less valuable they would become until they would be just chunks of metal.

Beef would become unavailable except for the wealthiest of the wealthy as cattle would be exterminated from the United States forcing the import of red meat for consumption.  Milk, butter, cheese and ice cream would also all need to be imported as domestic dairies would be a thing of the past.

But full-blown socialism is even worse, because at its core, it is the government confiscation of all private assets and money and redistributing them at the whim of government officials.  With democratic socialism it becomes a simple vote on who gets what, no matter who earned what. Free markets, which are the true expression of liberty, get abolished in favor of a political kleptocracy that determines who wins and who loses artificially negating merit.

The Green New Deal exemplifies this through its call for guaranteed incomes for those who do not want to work, after all, it is not fair for those gifted with ambition to do better economically with those without it. As Benjamin Franklin said, “Democracy is two wolves and a lamb voting on what to have for lunch.”  And socialism gives them the authority to justify taking whatever they want.

The immorality of a government system that strips away all individual power and puts it at the whim of others should be apparent, but in case it is not. Imagine a nine-year-old getting a bicycle paid for by parents who scrimped in order to pay for the present.  While the child is proudly riding his or her new bike, a group of neighbor kids decide that it isn’t fair that they have old bikes, chase down the child knocking him or her off the bike and taking it for their own.

When asked about the bike, the group who stole it simply state that it wasn’t fair that this one child should have it when they didn’t, so they confiscated it and gave it to someone without a bicycle.

That is exactly what a Democratic socialist scheme does. It dictates terms to the minority creating a society driven by envy and avarice.

And while the end is guaranteed to be empty shelves and deprivation as those who work accept the verdict of the majority and do only the bare minimum required.

In the end socialism is scarcity, as the moral bankruptcy of legalized theft destroys as surely and swiftly as a fire unleashed upon the entire nation with nothing to stand in its way.

So the next time someone utters the big lie that socialism and communism are nice, don’t let it stand.  Ask them how they would like it if someone moved into their home without permission, ate their food without paying, invited others to join them, and then physically removed the original homeowner because he or she had too much and needed to share.

When they look at you aghast, just tell them, there is nothing nice about socialism, it is evil and must be struck down before its roots get too deep.

That is the message I delivered across America from CPAC, please join me in helping destroy this scourge before it consumes our great nation.

The author is president of Americans for Limited Government. 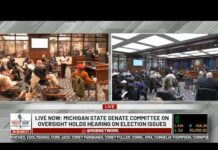 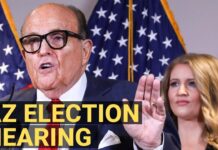 AZ Election Hearing: “Your Vote is Not as Secure as Your Venmo Account”