America is in deep financial trouble, and it is getting increasingly difficult to grow out of it.  This past year, our nation’s economy grew at a faster rate than at any time since 2005 at 2.9 percent, but the outlays (spending) grew much faster at more than 7.2 percent.

As a result, the budget deficit in fiscal year 2018 ballooned to $779 billion, and the actual national debt increased by $1.482 trillion in the just completed calendar year.

Our nation witnessed the government being shut down over relative pennies because the Democrats oppose securing the borders, but the real fight should have been over the bloated spending which is leading us to financial ruin. Yet, no one dared utter the idea of cutting the funding levels if the Democrats persisted in opposing wall funding.

As Rush Limbaugh might say, for those of you in Rio Linda, California, you can’t grow your way out of a national debt crisis by continuing to increase your overall debt-load at a 2.5-to-1 ratio over the growth of your economy.

The Balance.com notes, “the World Bank says that debt that’s greater than 77 percent is past the ‘tipping point.’ That’s when holders of the nation’s debt worry that it won’t be repaid. They demand higher interest rates to compensate for the additional risk. When interest rates climb, economic growth slows. That makes it more difficult for the country to repay its debt.”

And here is the crisis part, the U.S. debt to GDP including both publicly held debt and government held debt (Social Security Trust Fund, etc.) has now grown to 105 percent having blown past 77 percent in 2009 during the Obama spending spree. It passed 100 percent in 2014.

The good news is that the Trump Administration sees the problem and for the third straight year has proposed a budget which cuts baseline spending in an effort to bring the budget into balance.  The just released 2020 budget would reduce $2.7 trillion off of the baseline over ten years.  Additionally, it would save the nation $236 billion in interest payments over that same period while cutting non-defense discretionary spending by 5 percent while increasing defense by 5 percent.

The bad news is that the same clown car drivers who failed to fully fund the wall while dramatically increasing spending for the past three years are still in charge in Congress, even though they have shifted seats giving Democrats more power, the chances that they will independently seek to cut government spending are remote. In fact, they are already seeking to increase the spending caps to accommodate even more defense and non-defense discretionary spending choosing to push down the accelerator toward the fiscal cliff rather than hitting the brakes.

The only solution is for the President to become actively involved in all spending negotiations up front, so unlike two out of the last three times he signed a spending bill, he will actually have actually have had a hand in crafting it.

President Trump must take the lead in fighting for fiscal sanity now, or he will be pegged with the blame for the more than $2 trillion the national debt has already risen during his tenure by the very Democrats who fight so viciously for spending increases.

The President needs to lay down a marker against increasing the previously agreed upon spending caps, and fight to keep it in the face of opposition by defense hawks who will trade anything to get more money into the Pentagon, including our nation’s ability to fiscally survive.

For President Trump, now is the time to fight the spending battle in Congress, before the 60 vote bi-partisan majority in the Senate and the hard left majority in the House make a deal that he is presented with veto proof majorities in each House.  After all, Democrats have proven that they are willing to shut down the government to get their priorities and the GOP has in effect promised, never again.

So many things are going right in our nation’s economy. We are becoming energy dominant, jobs are plentiful, wages are rising and manufacturing is returning. But the economic conditions that made this possible can be wiped out if our D.C. elected officials don’t stem the spending surge.

And they will only act if they hear from Americans that it is time to get our house in order before it collapses.

The author is president of Americans for Limited Government. Reproduced with permission. Original can be viewed here. 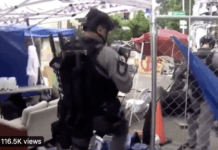