Socialist sweetheart Rep. Alexandria Ocasio-Cortez may soon earn a new role in a major federal agency — inmate in the Bureau of Prisons.

Ocasio-Cortez, who is leading the charge to impeach President Trump, may end up in prison before the end of his second term.

An investigation by The Daily Caller reveals Ocasio-Cortez and her campaign manager Saikat Chakrabarti were two of the theee board members controlling the “Justice Democrats” political action committee from December 2017 through the end of Ocasio-Cortez’s June 2018 Democratic primary campaign against incumbent Congressman Joe Crowley.

Justice Democrats PAC was one of the biggest donors to Ocasio-Cortez’s campaign, and she publicly praised the PAC for setting up her campaign, funding it and directing her to victory. She did not mention the fact it was her own PAC. She and Chakrabarti did not resign from the PAC until two weeks after she won.

Federal campaign finance law is complicated and hard to explain, but it’s blatantly illegal for a candidate or campaign to also control a PAC donating to their own campaign.

It would allow a candidate to break the $2,700 donation limits by getting her supporters to cut additional checks to the PAC she was running. It also allows the PAC she is running to attack her opponent, which Justice Democrats did, without it appearing the candidate was involved.

“If the facts as alleged are true, and a candidate had control over a PAC that was working to get that candidate elected, then that candidate is potentially in very big trouble and may have engaged in multiple violations of federal campaign finance law, including receiving excessive contributions,” former Republican FEC commissioner Hans von Spakovsky told The Daily Caller News Foundation.

It’s punishable by a five-year prison term, and a former Republican member of Congress is currently in prison for helping a political group design a newspaper attacking his opponent.

Ocasio-Cortez and Chakrabarti are going to tremendous lengths to hide the financial records of their operations from investigators.

Chakrabarti was both her campaign manager and executive director of the PAC, which also paid his for-profit company $1 million, allowing him to triple-dip from the united campaign operation. He is now her congressional chief of staff, and is exploiting a legal loophole to avoid the mandatory disclosure of his personal finances. 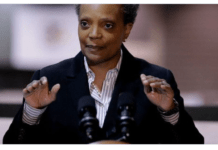