Senator Tom Coburn, “The problem in health care is not that markets have failed. The problem is they have never been tried. This report shows that hospitals and so-called health care ‘charities’ benefit handsomely from the status quo. The lack of price transparency in our health care system is driving up costs and reducing access and quality. Giving patients an honest look at health care economics is one of the best ways to drive reform.“

Adam Andrzejewski, CEO and Founder of Openthebooks.com, “America’s patients shouldn’t have to go on a scavenger hunt to discover prices for services. The lavish salaries for health care CEOs and rich endowments for charities may be one reason why the numbers are so elusive for patients. In every other area of the economy shoppers can see what things cost. It’s long past time to apply basic standards of transparency and price discovery to health care.“

For more than 50 years, American presidents have been sounding the alarm about America’s healthcare system and rising costs. Hard data backs up this concern. In 1970, healthcare amounted to 7% of GDP and today is near 20%.

BY THE NUMBERS:
$203.1 billion – the total of combined net assets of these 82 non-profit providers;
23.6% – the percentage of growth in combine assets from $164.2 billion to $203.1 billion; $20,000 – the annual healthcare costs for the average American family;
$21.6 million – Banner Health CEO earnings last year;$26.4 million – Combined lobbying costs spent by the 82 hospital organizations spent last year.

They found that these charitable hospitals and their CEO’s are getting richer, while the American people are getting healthcare poorer.

The average family paid $20,000 in healthcare costs last year.
Salaries ran as high as $21.6 million. In fact, six CEO’s made between $10 million and $21.6 million, while only 8 executives took a paycheck under $1 million.

The “return on investment” for these healthcare “non-profit” organizations was 20.5%.

So how are they legally characterized as a NON-profit? It doesn’t make sense.

The White House has issued an executive order to open the books on the real prices paid by patients for healthcare services.

This is the first step in shifting power to the individual and breaking up the healthcare monopolies. Thankfully, the open-government movement is revolutionizing U.S. public policy! 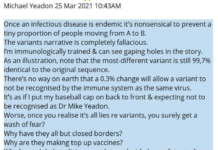 Not quite convinced about the vaccine? Neither is this guy