So much for Minnesota nice.

Crazed left wing radicals spent their evening not engaged in peaceful free speech like the Trump campaign did but in violence, intimidation and wanton destruction.

The side that demands tolerance seemed to be in short supply of it on this day:

It is not safe in Minneapolis any longer for Trump supporters. Please stay away from the vicinity and do not come out with branded gear pic.twitter.com/BLsJbtct0k

Perhaps they would rather go protest in Hong Kong . . . on second thought they wouldn’t want to upset their ideological brothers the Chinese Communists.

The situation outside the Trump rally in Minnesota is quickly deteriorating

A protestor can be seen waving the Chinese flag in front of riot police. While people in Hong Kong wave American flags for freedom, we wave Chinese flags pic.twitter.com/XVl551kyqZ

I certainly hope these protesters bought enough carbon credits to offset the environmental effects of their temper tantrum.

Anti Trump protestors in Minnesota stole about 40 hats off the heads of Trump supporters & then lit them on fire ? at the Trump Rally

They then left the ashes as a vigil against fascism, leaving a f*ck Trump sign on the top of the pile

This is tolerance. This is the left pic.twitter.com/jFhVNXrgId

It doesn’t matter who you are, if you aren’t ready to commit craven acts of violence to advance your ideology, then you are fair game for the jackbooted thugs of the Left.

In this riot of anti-trump. I was just trying to get through with my brother, and I’ve never been called a racist so many times let alone ever. I’ve never been shoved for just walking through for thinking I was a trump supporter. I don’t have opinions on trump but this was wack pic.twitter.com/pGRxFSVRxa

Of course the mainstream media framed the leftist rioting as: ” Supporters and protesters clashed Thursday night outside the Target Center after a rally for President Donald Trump.”

Oh and the police who used pepper spray to contain the out-of-control protesters were also blamed.

Now for what you won’t see . . . look at the Trump supporters juxtaposed with the violent leftwing protesters. Who do you think is responsible for the violence?

UPDATE: Spitting on Trump supporters is encouraged by the Left: 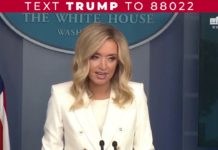 So, who is Kayleigh McEnany? 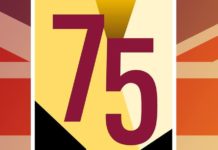