It is fitting that the Washington, D.C. establishment wants President Donald Trump removed from office for considering withholding military assistance to Ukraine, or that the talk of impeachment intensified as Trump was announcing the U.S. military withdrawal from Syria, for it was that type of caution in the use of military force that helped Trump get elected in the first place in 2016.

A joint study from Professor of Political Science Dr. Douglas Kriner of Boston University and Associate Professor of Law Dr. Francis Shen of University of Minnesota Law School in 2017 found that war takes its toll on voter attitudes towards the incumbent party.

Kriner and Shen noted that in prior studies the Civil War, Korean and Vietnam as well as the  Iraq wars, there was a strong correlation between states that had the highest casualty rates that tended to vote against incumbents associated with the war.

And 2016 was no different. The study stated, “we find that there is a significant and meaningful relationship between a community’s rate of military sacrifice and its support for Trump. Our statistical model suggests that if three states key to Trump’s victory – Pennsylvania, Michigan, and Wisconsin – had suffered even a modestly lower casualty rate, all three could have flipped from red to blue and sent Hillary Clinton to the White House.”

Maybe that’s why so many in Congress want to get rid of him, because he is not fighting the wars that they want him to and yet are too scared to authorize formally via the legislative process provided in Article I, Section 8 of the Constitution.

How much of a difference would have lower casualty rates made in the 2016 outcome? Per the study, “In each state, our analysis predicts that Trump would have lost between 1.4 percent and 1.6 percent of the vote if the state had suffered a lower casualty rate… such margins would have easily flipped all three states into the Democratic column. Trump’s ability to connect with voters in communities exhausted by more than fifteen years of war may have been critically important to his narrow electoral victory.”

It could happen again in 2020. Former Americans for Limited Government and current Market Research Foundation President Bill Wilson, commenting on a Sept. 5-6 Yougov study, noted that President Trump’s support among females almost doubled when coupled with statements praising presidential assistant Jason Greenblatt on his work seeking peace between Israel and the Palestinian territories.

Wilson added that Trump’s 2020 re-election “may in fact hinge on deepening his non-interventionist policies, fighting the warmonger neo-cons and bringing our troops home.”

In fact, this has been a clear pattern since President Trump began running for president in 2015. When he adopted the Michael Flynn position on cooperating with Russia on counterterrorism issues to kill Islamic State, the national security apparatus has been out to get him.

President Trump’s non-interventionist stance in the election fueled paranoid and false suspicions by intelligence agencies and the Justice Department that Trump and his campaign were Russia agents, leading to a nearly three-year long investigation into nothing, which was ultimately debunked by none other than Special Counsel Robert Mueller.

Ironically, just as the U.S. was pulling out of Syria, one of the greatest strikes against Islamic State occurred as U.S. special forces were eliminating the founder of Islamic State, Abu Bakr al-Baghdadi. Critics like Saturday Night Live aired an ill-timed, ill-considered skit blasting President Donald Trump for withdrawing U.S. military forces from Syria and “bringing jobs” and territory back to Islamic State.

This proved the U.S. could exercise force in the region when necessary to go after a specific target even though it was moving forces out of northern Syria along the Turkish border.

Another unfortunate was that by leaving Syria, the Kurds would be slaughtered by Turkey. Instead, the U.S. was able to almost immediately broker a ceasefire between Turkey and the Kurds, with Syria and Russia’s cooperation to contain any potential conflict including reemergence of Islamic State.

As for Ukraine, President Trump has been supportive of Ukrainian efforts to broker a peace settlement with Russia to end the five-year civil war that has cost more than 13,000 lives. The civil war there began after the U.S. supported the overthrow of Ukrainian President Viktor Yanukovych in 2014 to get a trade deal between Ukraine and the EU ratified, and Russia annexed Crimea and the breakaway provinces in eastern Ukraine.

Now, Ukrainian President Volodymyr Zelensky says that the key to peace is to engage in talks with Russian President Vladimir Putin, calling for a renewal of the Minsk Accords. Zelensky has even called for elections in the Donbass region once the status of military forces is settled.

But if the swamp in D.C. had its way, President Trump would be thrown out of office, and maybe Zelensky, too, so that the war policies in Syria and Ukraine could continue. That makes 2020 a choice election again: between President Trump who wants to keep the U.S. out of war, and the war party in Washington that wants make certain they never end.

Robert Romano is the Vice President of Public Policy at Americans for Limited Government. Reproduced with permission. Original can be viewed here. 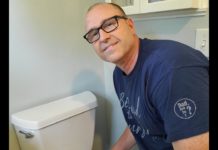 1000 year-old mill brought back into service during national shutdown