The situation in China is out of control. Medical staff on the frontline of this coronavirus outbreak are dealing with 100+ patients a day, and wearing adult diapers as they do not have time to go to the toilet and don’t have replacements for their very fragile hazmat suits.

Guan Yi, the virologist who identified SARS, with a chilling perspective on the Wuhan outbreak: “I’ve seen it all: bird flu, SARS, influenza A, swine fever and the rest. Most of the past epidemics were controllable, but this time, I’m petrified.”

As with the Russians and the Chernobyl lies, China is NOT reporting accurately. They are drastically under-reporting numbers although they have let slip that 29 of 31 provinces are now infected. They are closing Disney, the Great Wall and other gathering places – all as the whole country wants to return home for the Lunar New Year which occurs this weekend.

According to the doctor in one of the videos below, one person can infect 14 people – instantly. That’s a terrifying projection rate.

Approximately 40 million Chinese are barred from leaving Wuhan and 13 smaller cities around that megapolis, making this the largest quarantine in world history.

Chinese city Vuhan is blocked by army, nobody is allowed to leave the city. It is the city where the first coronavirus victims were registered. There are rumors of more than 100 casualties already. This is a big city, 12 million people live there, more than in New York pic.twitter.com/s6X8RFzQzm

Meanwhile, the World Health Organization is playing politics. It’s taking Chinese data at face value. It need to get off its ass and declare a global emergency.

The truth is leaking out

One of my China mainland contacts (he is national Chinese) sent this to me this morning and then wrote: “China is lying” and then explained the situation in #Wuhan is much worse than the world knows. #coronavirus pic.twitter.com/vHRPZkYCTW

A virologist in #Wuhan reports the government there has become paralyzed and has lost the ability to fight the coronavirus outbreak. This person believes Beijing is also incapable and is therefore appealing to the international community for immediate help. #China #WuhanOutbreak 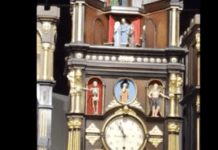