This Fall, Get the Children Back in School

“The American Academy of Pediatrics [AAP] has released a needed opinion that is strongly in favor of getting children back to school this fall,” the Washington Examiner editorial board writes.

“The AAP strongly advocates that all policy considerations for the coming school year should start with a goal of having students physically present in school,” a statement from the group reads. President Trump is hosting a National Dialogue on Safely Reopening America’s Schools event at the White House today. Click here to read more.

On Sunday night, the Mayor of Atlanta “issued a full-throated call for citizens to stop ‘shooting each other up on our streets,’ after an 8-year-old girl was shot and killed on the Fourth of July,” Gregg Re writes. “You can’t blame this on police officers,” Mayor Keisha Lance Bottoms said. Last month, President Trump offered federal help for any states and cities needing to quell violence and restore order to their streets. Read more in Fox News.

“At the direction of President Donald Trump, USDA built from the ground up an innovative new program called the Farmers to Families Food Box. This $3 billion program is supporting America’s farmers and producers by partnering with distributors to buy food that would otherwise go uneaten and distribute it to families and people who need food,” Agriculture Secretary Sonny Perdue writes in The Detroit News.

“President Trump just suspended nearly all guest-worker programs for the rest of the year. This historic executive order will open up more than 500,000 jobs to Americans—and it’ll disproportionately help Black citizens. These reforms aren’t mere rhetoric. They’re tangible proof that Donald Trump believes Black workers matter,” writes Tom Broadwater, an advocate for minority and other workers, in The Washington Times. 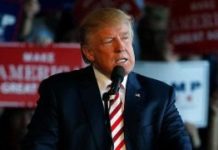