Here are some responses to her nomination.

Apart from matters of war and peace, the nomination of a Supreme Court justice is the most important decision an American President can make.

Today, it was my great honor to nominate one of our nation’s most brilliant and gifted legal minds to the Supreme Court. She is a woman of unparalleled achievement, towering intellect, sterling credentials, and unyielding loyalty to the Constitution: Judge Amy Coney Barrett… pic.twitter.com/l2yezt2UOi

“President Donald Trump has fulfilled his constitutional responsibility to nominate Amy Coney Barrett for a seat on the Supreme Court. Coney Barrett is highly qualified jurist and would make an outstanding associate justice. Her background demonstrates just the kind of fortitude and judicial restraint that the American people expect from their courts.

“President Trump’s strong record of choosing federal judges has been transforming our nation’s courts to a more originalist and Constitution-based system as it was always intended. It is our fervent hope that Coney Barrett will bring that same judicial philosophy to the Supreme Court to interpret the law as it is written and intended, protecting individual freedoms as enumerated in the Constitution from legislative, executive or judicial tyranny. We urge the Senate to move rapidly on this nomination and to confirm Coney Barrett before the election.”

“Judge Barrett is highly qualified in all the areas that matter – character, integrity, intellect, and judicial disposition. She is an outstanding Supreme Court nominee by President Trump.

“As the Chairman of the Senate Judiciary Committee, I’m very committed to ensuring that the nominee gets a challenging, fair, and respectful hearing. We move forward on this nomination knowing that the President has picked a highly qualified individual who will serve our nation well on the highest court in the land.”

“I congratulate Amy Coney Barrett on her nomination to our nation’s highest court, and I would like to commend President Trump on his excellent judgment in choosing this incredibly well-qualified nominee. Judge Barrett is an impeccable jurist and an extraordinarily thoughtful and principled woman committed to following our Constitution. I am also proud to see a New Orleans native who attended St. Catherine of Siena and Dominican High School as our next Supreme Court justice. I encourage the Senate to swiftly carry out a fair confirmation process that focuses on the qualifications of Judge Coney Barrett, and respects the dignity of the United States Supreme Court.”

“In nominating Amy Barrett to the Supreme Court, President Trump has again fulfilled his promise to appoint Justices who are not only exceptionally qualified, but willing to bravely stand up for the Constitution as it’s written and not bend to political pressures or personal preferences. Judge Barrett will be a great role model for future generations seeking to ensure that the rule of law advances the dignity of all people.”

Speaker of the House Nancy Pelosi

“If this nominee is confirmed, millions of families’ health care will be ripped away in the middle of a pandemic that has infected seven million Americans and killed over 200,000 people in our country. Everything hangs in the balance with this nomination: a woman’s constitutional right to make her own medical decisions about her own body, the right of LGBTQ Americans to marry who they love, the right of workers to organize and collectively bargain for fair wages, the future of our planet and environmental protections, voting rights and the right of every American to have a voice in our democracy,” Pelosi said in a statement. “Trump is exploiting this vacancy against the clear and overwhelming will of the American people, as he dismantles the pillars of health and economic security in America. Every vote to confirm this nominee is a vote to dismantle health care. The American people will hold every Senator responsible for their vote at the ballot box.”

“President Trump promised to appoint justices in the mold of Scalia and Thomas.  He has kept that promise and I look forward to supporting Judge Barrett’s confirmation. Justice Ginsburg was confirmed in 42 days, Justice O’Connor in 33, and both confirmations were nearly unanimous. But Democrats won’t be able to bring themselves to support Judge Barrett because they are beholden to leftwing extremists who want to pack the Supreme Court and defund the police while our cities burn.”

I disagree with much of her judicial philosophy and expect to disagree with many, maybe even most of her future votes and opinions. Yet despite this disagreement, I know her to be a brilliant and conscientious lawyer who will analyze and decide cases in good faith, applying the jurisprudential principles to which she is committed. Those are the basic criteria for being a good justice. Barrett meets and exceeds them. I got to know Barrett more than 20 years ago when we clerked at the Supreme Court during the 1998-99 term. Of the thirty-some clerks that year, all of whom had graduated at the top of their law school classes and done prestigious appellate clerkships before coming to work at the court, Barrett stood out. Measured subjectively and unscientifically by pure legal acumen, she was one of the two strongest lawyers. The other was Jenny Martinez, now dean of the Stanford Law School.

President Donald J. Trump’s nomination of Judge Amy Coney Barrett for the United States Supreme Court is a victory for the American people and the rule of law.

Like Justices Neil Gorsuch and Brett Kavanaugh, Judge Barrett was selected by President Trump because of her impeccable credentials and her impartial, fair and faithful reading of the Constitution.

To help advance her nomination, America First Policies has committed more than $5 million on a national television, digital and direct-mail advertising buy. Our first national commercial “We” will be televised on Tuesday, September 29th during the first Presidential debate.

Judge Barrett is a gifted jurist, a beloved mother of seven, and an exceptional choice for the United States Supreme Court, who should be swiftly confirmed.

“Amy Coney Barrett is a judge on the Court of Appeals for the 7th Circuit & on @realDonaldTrump’s pre-approved list for SCOTUS. She passed his ‘litmus test’ on overturning Roe v. Wade & striking down the ACA. Here’s where she stands on Americans’ big issues,” Schumer said in a series of tweets Monday.

“Barrett attacked the Supreme Court’s decision upholding the Affordable Care Act, which has helped millions of people secure health insurance coverage. Barrett also fought efforts to ensure that all women have access to contraceptives,” he said.

“She disagrees with ‘stare decisis’ — the idea that cases like Roe v. Wade are settled law in the courts — and instead has said she wants ‘space’ for ‘reargument,’” Schumer tweeted. “The bottom line: Judge Barrett has given every indication that she will be an activist judge on the Court. If chosen as the nominee, she will be the deciding vote to overturn Roe v. Wade and to strike down pre-existing conditions protections in the ACA.”

"I was glad her two kids did come out, I couldn't find too many other people of color in that audience."pic.twitter.com/uH7gEdzfy9 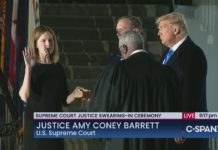 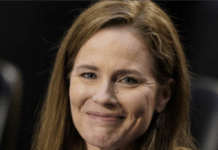