“The math just doesn’t add up for anything and we know Dominion has a long history of rigging elections, because that’s what it was created to do to begin with,” Powell told Tuesday’s “Greg Kelly Reports,” noting even the “founder of the company admits he can change a million votes, no problem at all.”

Powell told host Greg Kelly the team has an affidavit of a former high-ranking Venezuelan military officer who now lives in America, saying he saw the rigging of Venezuelan elections for Hugo Chavez.

“So don’t tell me there’s no evidence of fraud,” she continued. “We’ve got increasingly mounting evidence of significant fraud across multiple states that casts into question the validity of elections in every swing state.”

It is not just limited to Nevada, Arizona, Michigan, Wisconsin, and Georgia either, she said. adding “it went beyond that, too.”

Powell said the ease of changing vote tallies and manipulating results was a “feature” of the devices, according to the military officer’s affidavit.

“It was created so Hugo Chavez would never lose another election, and he did not after that software was created,” Powell said. “He won every single election and then they exported it to Argentina and other countries in South America, and then they brought it here.”

Powell also argued, as a foreign company, the use of that election system already violated President Donald Trump’s order against foreign interference in our election.

And that includes the Democrat and mainstream media’s efforts to ignore the corruption.

“What’s really stunning is the efforts against getting the stuff out on this,” she concluded. “But you have to realize every tech company, every media company, every social media company, scads of globalist corporations have been doing business in countries with these dictators that have been installed through this rigged election system for decades.”

And as for “foreign interference”

. @SidneyPowell1 is referencing Trump’s EO. This is enormous and everything I prayed for. pic.twitter.com/W5az3e6ncu 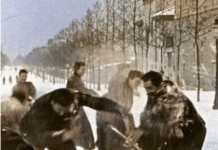