Researchers from several countries collaborating on a mathematical modeling study estimated that it would take about 400 days for the number of new infections by the novel coronavirus to fall to zero or thereabouts in the United States without vaccination but with continuing non-pharmaceutical interventions (NPIs). By then, 952 in every 10,000 Americans would have been infected, among whom 20 would have had to be hospitalized, 10 would have required intensive care, and 2.3 would have died.

The projections also suggest that large-scale administration of a vaccine with 95% efficacy (such as the one now available in the US) would shorten the epidemic by 100 days and reduce the viral attack rate by 48%, so that not 952 but 418 per 10,000 would be infected, with 7.5 requiring hospitalization and 4 needing intensive care, while the number of deaths per 10,000 would fall below 1. The calculations also assume maintenance of NPIs, such as face-covering and social distancing.

The study was led by scientists at York University in Toronto (Canada) and the University of Campinas (UNICAMP) in the state of São Paulo (Brazil). A paper reporting the results is published on the preprint platform medRxiv, and is being peer-reviewed.

“Many people think the advent of vaccination will solve everything immediately, but that’s not true. It takes time to vaccinate a considerable proportion of the population and attain collective immunity. Our study set out to estimate the short-term impact of vaccination in the US.”

Thomas Vilches, a postdoctoral fellow at UNICAMP’s Institute of Mathematics, Statistics and Scientific Computation (IMECC) with support from FAPESP.

The calculations also assumed that the effective SARS-CoV-2 reproduction rate (Rt) in the US was 1.2, meaning 100 carriers of the virus infect on average 120 people, who infect 144 others, and so on. “Rt in the US was reportedly 1.2 in November, when we did the study,” Vilches said. “It fell a little after that but now appears to be rising again in some states, possibly owing in part to the arrival of the novel variant.” A frequently updated state-by-state plot of Rt in the US can be viewed at: https://rt.live.

The main scenario used in the study, from which the above results derive, assumed that 10% of the US population had already developed immunity to SARS-CoV-2 by the start of the vaccination campaign.

Based on data from the Centers for Disease Control and Prevention (CDC), an agency of the US Department of Health and Human Services, the researchers also assumed it would be possible to vaccinate some 7 million people per day (30 doses per 10,000 inhabitants) and that it would take 280 days to vaccinate 40% of the population, considering two doses per person 21 days apart. Healthcare workers, the elderly, and people with comorbidities would be prioritized.

“Brazil has an advantage in this respect [mass vaccination capacity], thanks to its national public healthcare system [SUS] and national immunization program,” Vilches said.

José Gomes Temporão, a former health minister, recently recalled that 80 million Brazilians were vaccinated against the H1Ni influenza virus in 2010 under the aegis of the SUS. In an interview given to leading daily newspaper O Globo, Temporão also said Brazil is one of only a few countries that can vaccinate 10 million children against polio in a single day.

The findings of this study cannot be extended to Brazil simply by inputting a different number for the efficacy of the vaccine, Vilches noted. “You also have to factor in the different demographics, such as the distribution of the population by age group, and epidemiological parameters such as Rt and the death rate from COVID-19, among other variables,” he said. “Ideally, the analysis should distinguish between the five regions of Brazil. It ought even to focus on smaller areas since the demographics vary considerably between cities and states across the country.”

The rise in Rt throughout the US after the holiday season will certainly mean a different situation from the one described in the article, Vilches opined, stressing the importance of maintaining NPIs to prevent the disease from spreading even faster. “Most people with symptoms are currently staying at home, but if this behavior changes the impact of vaccination may be a lot weaker than we estimated,” he said. “Our projections suggest vaccination reduces the attack rate by almost 50%, which would be canceled out if Rt doubled.” In epidemiology, the attack rate is the percentage of an at-risk population that contracts the disease during a specified time interval.

“An educational campaign should be launched to warn people not to return to their previous habits too soon,” Vilches said. 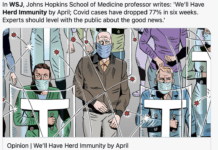 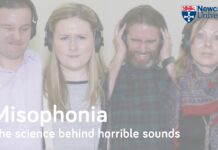 Hate listening to people eat? There’s a word for that! 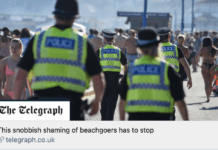 So where CAN’T you catch Covid? Here, apparently