The South China Sea (SCS) dispute is one of the globe’s most complex and volatile geopolitical flashpoints. Involving a patchwork of overlapping territorial and maritime claims made by China, Taiwan, Vietnam, the Philippines, Malaysia, Brunei, and Indonesia, the dispute centers on numerous atolls and islands and vast tracts of sea, encompassed within China’s so-called Nine-Dash Line. In addition to issues of territorial sovereignty, maritime jurisdiction, resource access, and shipping routes, the SCS dispute is driven by nationalist sentiment. This conflict rouses widespread and sometimes violent public feelings in China, Vietnam, and the Philippines, in particular, and is regularly used by leaders in claimant states to mobilize political support. (CATO)

You will recall that we have been talking about Gray Zone activities – acts that aren’t quite Acts of War but are definitely provocative. The Chinese are doing this in the South China Sea right now.

Another SCS island to monitor is Taiping Island (Itu Aba) in the Spratlys.

While the island is claimed by PRC, VN, and PH, it's Taiwan who holds admin control since 1956 and operates the island as a military airbase.

Notably, Whitsun Reef is just a few miles away. pic.twitter.com/ITxOTKkA9P

There are numerous oil wells to the west of the banks. The People’s Republic of China claims the island, atoll and banks as part of Guangdong Province.

In January 2007, the Republic of China (ROC) government designated the Pratas atoll as the Dongsha Atoll National Park, the first marine national park in Taiwan.

On 8 January 2013, an office of Chunghwa Post was established on Pratas Island.

Fast forward to last year – and remember that the Chinese are now rather heavy-handedly controlling Hong Kong, rather than allowing it to operate semi-autonomously.

In September 2020, China (PRC) conducted air drills over the waters between the main island of Taiwan and Pratas Island that intruded into the ROC Air Defense Identification Zone (ADIZ). The planes were issued radio warnings by the ROC military until they left.

On 15 October 2020, a regular civilian charter flight by Uni Air had to abandon its trip from the main island of Taiwan to Pratas Island when Hong Kong air traffic controllers told the captain of the aircraft that there were “dangerous activities” happening below 26,000 ft (7,900 m) and that the Uni Air aircraft could not enter the Hong Kong Flight Information Region (FIR).

The transcript of the conversation between the pilot and air traffic control was released by the ROC Civil Aeronautics Administration. The next day, the ROC Minister of National Defense Yen Teh-fa called on China not to “disrupt the order of international aviation”. On 20 October, Deputy Chief of the ROC General Staff, Lieutenant-General Li Ting-sheng, visited Pratas Island. He made an inspection of the living facilities of the military personnel and gave them instructions.

On 26 October, the same Uni Air aircraft made the round trip flight between the main island of Taiwan and Pratas Island.

On 27 October 2020, a Y8 PRC military aircraft entered ROC airspace between the main island of Taiwan and Pratas Island for the twenty-first time that month. On 28 October, Zhu Fenglian of the Taiwan Affairs Office of the PRC was asked whether, in light of PLA military exercises in Fujian and Guangdong, there was or was not a plan to take Pratas Island from the ROC. Feng responded that she did not have to answer hypothetical questions.

On 3 November, Y-8 plane entered the ADIZ of the ROC in the area between the main island of Taiwan and Pratas Island.

On 4 November, the ROC Minister of National Defense, Yen Teh-fa, stated in a legislative hearing that since January 2020, 276 Chinese military planes had entered the airspace between the main island of Taiwan and Pratas Island, activity that Yen associated with plans by China for a creating its own ADIZ in the South China Sea.

On 6 December, a PRC air force Y-8 plane entered the Taiwan ADIZ between the main island of Taiwan and Pratas Island, the fifth day in December that Chinese military aircraft entered Taiwan’s ADIZ.

China is setting itself up for something big, no wonder the FBI consider it its top counterintelligence priority.

So does the U.S.-CHINA ECONOMIC AND SECURITY REVIEW COMMISSION

Not everyone thinks there’s a threat though, here’s CATO:

U.S. lawmakers and analysts see China’s efforts to control much of the South China Sea as a serious threat, endangering regional security, freedom of navigation, and the liberal world order. This paper finds that political leaders and experts exaggerate the dangers of China’s South China Sea policy.

As the world’s largest trading nation, China has a deep vested interest in ensuring that trade routes in the South China Sea remain open, and Beijing has no interest in military conflict with regional powers. Although China’s South China Sea policy is inconsistent with some of the norms and institutions of the rules‐​based liberal world order, Beijing does not seek to undermine this order as a whole and remains supportive of key elements of the international system.

To avoid needlessly entangling itself in the South China Sea dispute, the United States should not support the territorial claims of any state and should make clear that the U.S.-Philippine Mutual Defense Treaty does not apply to disputed territory and waters claimed by the Philippines. In addition, the United States should encourage claimant states to agree on de facto jurisdiction over disputed areas and to jointly exploit resources while more permanent resolutions are negotiated. Finally, Washington should understand that ratifying the United Nations Convention on the Law of the Sea will have little, if any, effect on the South China Sea dispute. 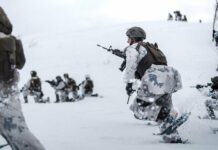 The Arctic: Battleground of the Future 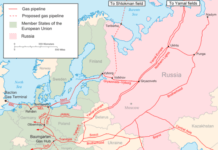 Update: Ukraine, Russia – Tension in the region. US concerned