This week, The Port of Houston’s two container terminals, Bayport and Barbours Cut, were shut as a result of a “hardware failure” that began Monday morning.

These container terminals handle about two-thirds of all the containerized cargo in the U.S. Gulf of Mexico. Like other container ports around the country, the port has seen a continued surge of imports following the pandemic. Year-to-date through June, the Port Houston has recorded 1,607,793 TEUs for a 13% increase over last year.

In a statement, the Port of Houston went out of their way to say that the incident was not a cyber attack. The port’s executive director, Roger Guenther, decided to explain the situation in a letter to customer and stakeholders.

“Yesterday, in advance of the truck gates opening at their normal time of 7:00 a.m. we experienced a major failure of the storage devices that support all of the applications used to operate both Barbours Cut and Bayport Container Terminals. Our staff responded immediately and moved the applications and associated data to a redundant set of storage devices and the terminals were again operational by 10:00 a.m. Unfortunately, the redundant storage devices failed at 12:00 noon and the terminals have been unable to process any transactions since then. I want to be clear that this is not a cyber-attack on the Port Houston operating system,” writes Guenther.

Ships that were already in progress have been able to continue working, but operations on new vessels “have not been possible”. Truck gates at both container facilities are also idle.

Guenther later reported that the port was in possession of necessary hardware, but configuration and restoration “has been a slow process”.

The internet doubts that this was “hardware”. Grey Zone war is fought with asymmetric tactics designed to maximize pain without firing a shot, or looking like an open act of war. To strangle further an already highly congested supply chain would be a typical move by a bad actor overseas.

How to Survive a Tsunami 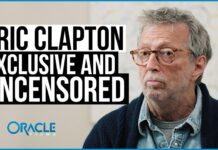 Eric Clapton Has Had Enough!