“This idea that, you know, ‘What do you want to do with Biden: I want to box him’ … I should be so lucky,” the president said. “But it’s the kinds of things or, you know… the stuff coming out of Florida, the stuff that’s coming out of — you know, if Robert E. Lee had been in Afghanistan he would have won. Anyway, I’m telling you too much.”

Trump did say: “If only we had Robert E. Lee to command our troops in Afghanistan, that disaster would have ended in a complete and total victory many years ago.”

The politicians lost the war in Afghanistan, not the U.S. military. And think what you may of Robert E. Lee, but the Civil War general had a stellar reputation as a brilliant military tactician.

As for the boxing remark, Ol’ Joe left out a lot of context there.

The boxing bablble came because Trump had been asked earlier about who’d be his desired boxing opponent.

“You know, he once said, ‘Oh, I’d like to take him behind the bar,’” Trump continued. “He’d be in big trouble if he ever did. No, I think Biden would go down within the first few seconds.”

Crowley responded to video footage of Biden’s ramblings, tweeting: “Everyone sees it, everyone knows it … but no one is allowed to talk about i

Everyone sees it, everyone knows it … but no one is allowed to talk about it https://t.co/VsuXG0MslZ 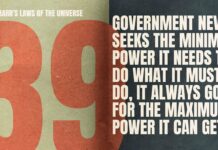 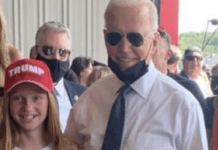 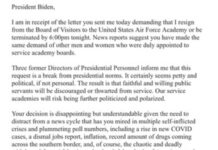 Biden Breaks Norms As He Fires Trump Appointees From Boards