GOP senators need to understand that they cannot just point at how bad Chuck Schumer is and expect to be given the majority.  Instead, they need to demonstrate that they will stand up for freedom and fight.

A personal note from Rick Manning at Americans for Limited Government.

Liberty lovers, we are winning!!!

It may not always feel that way, and a lot of innocent people have lost their jobs to the administrative state and their crony capitalist enablers, but Joe Biden’s vaccine coercion is on the run. And millions of Americans who have just said no to mandated vaccinations are the reason.

Win 1:  OSHA has already suspended the implementation of their ill-conceived emergency mandate due to decisions in the 5th Circuit Court of Appeals.

Win 2: The 8th Circuit Court of Appeals just found that the Biden administration’s attempts to force the firing of unvaccinated health care workers is unconstitutional.

Win 3: Just yesterday a federal judge in Kentucky stopped the firing of unvaccinated employees who work for federal contractors in a stunning defeat for the Biden legal team.

Win 4: State after state have passed legislation voiding the federal vaccine mandates, and even all fifty GOP U.S. senators have voted against funding the implementation of the vaccine mandate.

Unfortunately, many of those same senators then voted for funding the federal government for the past three months without this prohibition.

Now, they face another chance to defund Biden’s implementation of the vax mandates in the Senate, and to fight in the House against Nancy Pelosi’s rubber stamp majority.

Congress may be voting as early as December 1 to fund Biden’s vax mandates for another five to six weeks, which is why your email to your Senators right now matters.

On the crony capitalist front, Biden has attempted to strong-arm U.S. businesses into doing his dirty work for him by firing employees, whether a federal government mandate is in place or not.

But, even these efforts are beginning to fall apart as the Big Three Automakers have agreed with the United Auto Workers  not to enforce the vaccine mandate against union members in their respective companies. And the head of the American Truckers Association has predicted supply chain disaster if the mandates are enforced with up to 40 percent of affected drivers refusing to get the jab.

CLICK HERE TO SEND AN EMAIL TO EIGHT MAJOR CORPORATE CEO’S URGING THEM TO JUST SAY NO TO ENFORCING THE UNCONSTITUTIONAL VACCINE MANDATE.

Your action is making a huge difference with CEO’s receiving a total of hundreds of thousands of emails urging them to back off of imposing vaccine mandates.

Local, state and federal politicians have been inundated by your emails for months urging them to take a stand.

We see it working in some cities and counties.  We see it working at the state level. And now we need to see congressional Republicans stand up against the mandates by defunding them, and assigning Biden’s coercive directives to the scrap heap of history where they belong.

Right now, GOP senators need to understand that they cannot just point at how bad Chuck Schumer is and expect to be given the majority.  Instead, they need to demonstrate that they will stand up for freedom and fight.

GOP Senators can stop Biden’s vaccine mandates if they refuse to give Joe Biden the votes to fund the federal government unless the vaccines and Biden’s attempt to deny states and hospitals access to COVID cures like monoclonal antibody treatments are defunded.

No excuses.  It is time to get the job done.

And be assured, your emails make a difference, because politicians need to be led.  Rather than waiting on them to take the reins, you are letting them know in no uncertain terms what you expect.  And the message is getting through.

Remember, when the people lead, freedom rings.  Thank you for digging into this fight, when many may have gotten discouraged and walked away.  America is worth saving.  Individual liberty is worth fighting to preserve.  This is the battle of our generation, and we are winning because you are making it happen.

Please share this note with all your friends, because we need to double the number of emails going into key corporate CEOs and Congress.

The fight is now, and because you are leading the politicians, rather than waiting upon them to take the reins, we are winning. 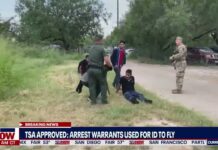