Home Way of Life Just for fun Terrible jokes for 4th of July! 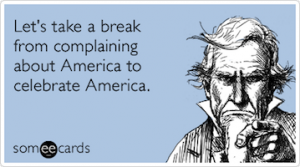 Here you go – some terrible riddles for you to ask the kids!

What did one flag say to the other flag?
Nothing. It just waved!

Why did Paul Revere ride his horse from Boston to Lexington?
Because the horse was too heavy to carry!

How is a healthy person like the United States?
They both have good constitutions!

What dance was very popular in 1776?
Indepen-dance!

What would you get if you crossed George Washington with cattle feed?
The Fodder of Our Country!

Teacher: “Where was the Declaration of Independence signed?”
Student: “At the bottom!”

Did you hear the one about the Liberty Bell?
Yeah, it cracked me up!

What did King George think of the American colonists?
He thought they were revolting!

What was the craziest battle of the Revolutionary War?
The Battle of Bonkers Hill.

What do you eat on the 5th of July?
Independence Day-old pizza.

What kind of tea did the American colonists thirst for?
Liberty.

What’s the difference between a duck and George Washington?
One has a bill on their face and the other has their face on a bill.

What quacks, has webbed feet, and betrays his country?
Beneduck Arnold.

Why are there no knock knock jokes about America?
Because freedom rings.

Where did George Washington buy his hatchet?
At the chopping mall.

Who was the biggest joker in George Washington’s army?
Laugh-ayette. 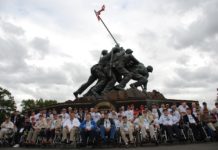