Home Health The People are Waking Up

In the UK, where the government’s (and NWO’s) mouthpiece, the BBC pushed hard for the vaccine and never queried the “science”, the people are waking up. This is a massive protest outside the old BBC buildings (odd choice) – which naturally, they did not cover on the nightly news.

“Shame on you!” chanted by uproarious crowd outside @BBC HQ,
Why?

Russell is on fire — and hilarious here. Doctor speaks out on BBC – shocks announcer

THE BBC AIRED THIS?!

‘Take the vaccine & we’ll give you a free burger & fries’ 😂 pic.twitter.com/2mQmQFMEfm

A battle won? Or are they learning from their experience?

“Countries need surveillance infrastructure that will enable their authorities to identify and punish citizens who do not comply with our global health mandates.”pic.twitter.com/LTEYq6PQYf 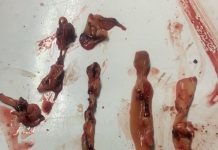 Doc Opens Up About “The Thing” On BBC…and Much, Much More.