Home Editor's Picks We’re being battered by a solar storm!

Right now, the Earth is being battered by a huge solar storm, which while providing some spectacular fireworks, could also disrupt the nation’s power grid, computers, air traffic control, your GPS, your cellphone and pretty much any electrical equipment.

A huge blast of magnetic plasma (solar flare) shot out of the sun on Sunday, travelling faster than usual, according to the US National Oceanic and Atmospheric Administration (NOAA). It brought with it the biggest solar storm at least since March, and maybe since September 2005.

A solar flare is a sudden flash of brightness observed over the Sun’s surface, which is equivalent to 160,000,000,000 megatons of TNT! They are often, but not always (and no one knows why not), followed by a colossal coronal mass ejection (CME).The flare ejects clouds of electrons, ions, and atoms through the corona of the sun into space. These clouds typically reach Earth a day or two after the event.

When the ejection is directed towards Earth and reaches it as an interplanetary CME, the shock wave of this traveling mass of solar energetic particles causes a geomagnetic storm. This can disrupt Earth’s magnetosphere, compressing it on the day side (where the sun is shining) and extending the night-side magnetic tail.

When the magnetosphere reconnects on the nightside, it releases terawatts of energy back towards the Earth’s upper atmosphere. X-rays and UV radiation emitted by solar flares can affect Earth’s ionosphere and disrupt long-range radio communications.

The frequency of occurrence of solar flares varies, from several per day when the Sun is particularly “active” (now) to less than one every week when the Sun is “quiet”, following the 11-year cycle called the solar cycle. Large flares are less frequent than smaller ones. 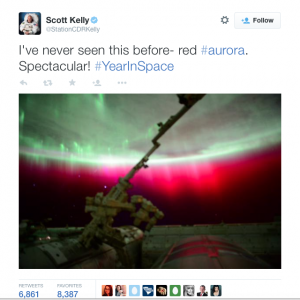 Humans at high altitudes, as in airplanes or space stations, risk exposure to relatively intense cosmic rays. Cosmic rays are potentially lethal in high quantities. The energy absorbed by astronauts is not reduced by a typical spacecraft shield design and, if any protection is provided, it would result from changes in the microscopic inhomogeneity of the energy absorption events. Which makes this photo taken from the International Space Station both very beautiful — and very scary.

America’s power grid is decrepit, huge and wholly inter-connected.  It’s like that domino game, one goes and it has a knock on effect throughout a large section of the grid.

An overload, a cascading problem is more than the U.S. Grid can deal with. So you have to be prepared for an outage that could continue for many days, even weeks. And you also need to prepare for voltage surges that could not only fry the grid, but take your personal electronics and many national communications systems with it.

So, think about unplugging your phone and computer from the mains – and definitely plug them into a surge strip for the next few days. Or charge up your battery chargers – they’ll be easier to replace than your computer or cellphone. And you may have to forget the internet, those communication satellites are in atmosphere could be zapped. So print off your phone numbers, and find an old-fashioned hard wired phone if you can still use one in your house. (I’m the last hold out on the block against fiber optic and have been taking lessons from an old telecoms engineer in how to fix the last bit of copper cable between me and the street. That’s the bit the big guys don’t want you to have anymore and refuse to maintain.) Also you can build a special Faraday Cage to protect against the pulse or use this everyday household item as an emergency measure.

You’re going to have to plan for a long-term knock out power event!

Food: Think about it. Everyone needs power to get food through the food chain to the stores. It’s going to be a shambles and you can forget coolers. You’d need to get used to dealing with food like they do in Third World countries. Less meat (and much less clean with all the stomach issues that go with that.) Food will be scarce and very expensive. You ALWAYS need a food reserve on hand that can feed you until whenever the chaos event has passed. You should have AT LEAST a month’s supply.  Six months would be better. Cans, dried foods, especially beans, pulses and fruits, clean water, salt, sugar, oil, flour. Stick to the basics. Add flavors with dried herbs and spices. But have a lot of it.

Money: Banks are online nowadays. Don’t even think about using your ATM. Keep cash and keep items to barter like booze, food, batteries and tobacco products.

Work: If your job is office based you have a problem. You won’t be working and the company won’t be able to pay you. It’s time to dust off a barter skill like fishing or hunting, cooking or water purifying.  And dig out that old bike – you’re going to need it. Or get an old pre-electronic car that doesn’t rely on circuitry to function.

Power: Batteries, lots of them. Go get them NOW! Pick them up every time you go to Costco or the Dollar Shop. Get more. And barbecue propane gas tanks. Have as many as you can afford. You can cook anything on your grill if you need to. Get a camping stove with refill canisters. Got a fireplace? You’re golden. Make sure it’s swept and start collecting firewood. Candles for nighttime (Jars are a great way to hold them, they’re safer and the glass magnifies the glow)

Squirrel fan mail: How to build a homemade compass