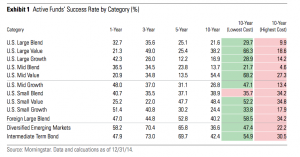 The Active/Passive Barometer, introduced at Morningstar’s  annual Investment Conference in Chicago this week, measures the relative performance of active U.S. fund managers against passive U.S. funds within their respective Morningstar categories. Other studies measuring the performance of active versus passive strategies have compared active funds to their respective benchmarks.

The Active/Passive Barometer report is unique in the way it measures active managers’ success relative to the actual, net-of-fee performance of passive funds, rather than an index which isn’t investable.

Many past studies have shown that, over time, most actively managed mutual funds underperform their respective benchmarks. But a this report finds that low-cost active funds tend to outperform higher-cost active funds over the long term. Higher-cost funds are also more likely to be shuttered or merged away.

“Our approach is squarely focused on the performance of actual investable options, instead of an index,” said Ben Johnson, Morningstar’s director of ETF research. “We’re also replicating the investor experience by studying funds based on their category classification at the beginning of the time period, controlling for survivorship, and taking into account the importance of fees.”

As reported in WealthManagement.com, Morningstar found that over the last 10 years ending Dec. 31, 2014, the cheapest active funds had higher success rates than the most expensive funds in all categories except one—U.S. small blend. The lowest cost U.S. large value funds, for example, had a success rate of 66.3 percent over the 10 years, compared to 18.6 percent for the highest cost funds in that category.

The success rate is based on the percentage of active funds that survived and generated returns in excess of those produced by the average passive fund in the same time period in a particular category.

Overall, active funds underperformed their passive counterparts and had higher mortality rates, meaning funds were merged or closed, across nearly all asset classes and Morningstar categories. U.S. mid-cap value funds, however, had a success rate of 54.4 percent over the 10-year period, the only category with a success rate over 50 percent, Morningstar said.

The success rate is based on the percentage of active funds that survived and generated returns in excess of those produced by the average passive fund in the same time period in a particular category. Morningstar says that fees matter. One might argue that “of course they’d say that.”

What do you think? Do fees matter?