Another cool piece of technology from the industry keen to improve our space launch capabilities. And to anyone wondering why we post new technology in a self-reliant web site it’s because we believe that we should all know the Old Ways, but we should be ready to adopt the New. Self-reliance means being able to deal with ANYTHING!

This news about space launching comes at a time when the people on earth are looking to celestial objects with a mind to mining them once we run out down here (or it gets too difficult or expensive.)
In case you don’t know, asteroid mining is the exploitation of raw materials from asteroids and other minor planets, including near-Earth objects. Minerals and volatiles could be mined from an asteroid or spent comet then used in space for in-situ utilization (e.g. construction materials and rocket propellant) or taken ba 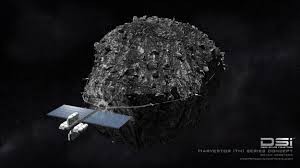 ck to Earth. These include gold, iridium, silver, osmium, palladium, platinum, rhenium, rhodium, ruthenium and tungsten for transport back to Earth; and iron, cobalt, manganese, molybdenum, nickel, aluminium and titanium for construction, water, and oxygen to sustain astronauts, as well as hydrogen, ammonia, and oxygen for use as rocket propellant.

So here’s the scoop on the launch tower, a Canadian company has been granted a United States patent for the design of a 20-km-high tower that would act as a launch pad for space flight.

The freestanding space tower concept, developed by Thoth Technology Inc., is held rigid by pressurized gas and would allow spacecraft and people to be lifted to a level in the atmosphere requiring less force to launch.

Reaching 20km above Earth, it would stand more than 20 times higher than the world’s current tallest building, the 829-metre-high Burj Khalifa in Dubai, United Arab Emirates.

While Outer Space proper is considered to begin around 100km out, 20km is just beyond the 19-km “Armstrong Limit”, the point at which atmospheric pressure is so low that your bodily fluids would boil off without a protective suit.

Thoth Technology, named after an Egyptian god associated with the moon, says the tower would offer “an exciting new way to access space, using completely reusable hardware and saving more than 30% of the fuel of a conventional rocket.”

Astronauts would ascend to 20km by electrical elevator.

“From the top of the tower, space planes will launch in a single stage to orbit, returning to the top of the tower for refueling and reflight,” said the design’s inventor Dr. Brendan Quine, who is also Professor of Space Engineering and Planetary Physics at York University, Toronto.

Thoth President and CEO, Caroline Roberts, believes the space tower, coupled with self-landing rocket technologies being developed by others, will herald a new era of space transportation.

“Landing on a barge at sea level is a great demonstration, but landing at 12 miles above sea level will make space flight more like taking a passenger jet,” she said.