Add 1 glass of water and 2 tablespoons of salt, then use the lamp for 8 hours.

There are no materials and components inside the lamp that may cause fire accidents. Which is one less thing to worry about for families that rely on kerosene lamps as their main source of lighting, especially in the disaster-prone Philippines where these lamps are being piloted.

This lamp uses the science behind the Galvanic cell, the basis for battery-making, changing the electrolytes to a non-toxic, saline solution — making the entire process safe and harmless.

This startup says: Since we are in the early stage of production, we will launch the product and focus in the Philippines first, sending out thousands of units for field testing, improving and developing the design further before venturing outside. Along this we will start crowd sourcing campaigns in which some of you might be able to receive the beta version of the lamp.

We’ll be watching with great interest. 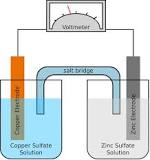 A galvanic cell, or voltaic cell, named after Luigi Galvani, or Alessandro Volta respectively, is an electrochemical cell that derives electrical energy from spontaneous redox reactions taking place within the cell. It generally consists of two different metals connected by a salt bridge, or individual half-cells separated by a porous membrane. Galvanic cells are typically used as a source of electrical power. By their nature, they produce direct current.