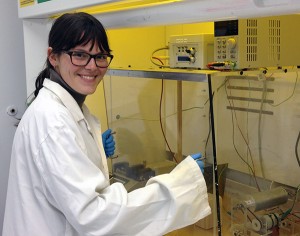 Researchers at Swinburne University of Technology in Australia are developing innovative nanofibre meshes that might draw bacteria out of wounds and speed up the healing process.

The research is the focus of Swinburne PhD candidate Martina Abrigo, (photo) who received the university’s Chancellor’s Research Scholarship to undertake this work.

Using a technique called electrospinning – in which polymer filaments 100 times thinner than a human hair are squeezed out of an electrified nozzle – Ms Abrigo and her colleagues have made nanofibre meshes that can draw bacteria from a wound.

In the first phase of research polymer nanofibres were placed over the top of films of Staphylococcus aureus, a bacterium involved in chronic wound infection. The researchers found the bacteria quickly attached to the fibres.

When the fibres were smaller than the individual bacteria, fewer cells attached and those that did attach died as they attempted to wrap around the fibre.

In the second phase, the tiny nanofibres were coated with different compounds and tested on the bacteria Escherichia coli, also commonly found in chronic wounds.

In the third phase of research, the nanofibre meshes have been tested on tissue-engineered skin models in a partnership with researchers at the University of Sheffield in the UK. The results of this research are yet to be published, but indicate that similar effects could be seen in living tissue.

“For most people, wounds heal quickly. But for some people, the repair process gets stuck and so wounds take much longer to heal. This makes them vulnerable to infection,” Mas Abrigo said.

“We hope this work will lead to smart wound dressings that could prevent infections. Doctors could put a nanomesh dressing on a wound and simply peel it off to get rid of the germs.”

From the Paper: Electrospun materials have been widely investigated in the past few decades as candidates for tissue engineering applications. However, there is little available data on the mechanisms of interaction of bacteria with electrospun wound dressings of different morphology and surface chemistry. This knowledge could allow the development of effective devices against bacterial infections in chronic wounds. In this paper, the interactions of three bacterial species (Escherichia coli, Pseudomonas aeruginosa, and Staphylococcus aureus) with electrospun polystyrene meshes were investigated. Bacterial response to meshes with different fiber diameters was assessed through a combination of scanning electron microscopy (SEM) and confocal microscopy. Experiments included attachment studies in liquid medium but also directly onto agar plates; the latter was aimed at mimicking a chronic wound environment. Fiber diameter was shown to affect the ability of bacteria to proliferate within the fibrous networks, depending on cell size and shape. The highest proliferation rates occurred when fiber diameter was close to the bacterial size. Nanofibers were found to induce conformational changes of rod shaped bacteria, limiting the colonization process and inducing cell death. The data suggest that simply tuning the morphological properties of electrospun fibers may be one strategy used to control biofilm formation within wound dressings.