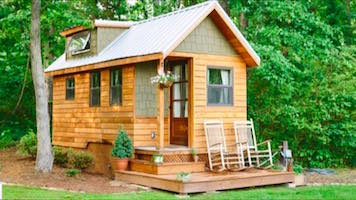 These little living quarters, set in the woods or upon a lakeshore, intrigued him from childhood, said Angstadt, who has spent the last 13 years building and renovating area homes.

Among his projects are city houses on narrow infill lots that measure no more than 15 feet across. So, tiny houses–a burgeoning market focused on smaller, simplified living–seemed like a natural fit for the Fredericksburg-based contractor.

A year ago, Angstadt founded Tiny House Building Company, where an 8- by 24-foot model home secured upon a steel trailer regularly catches the eye of passersby.

The little, self-contained house includes a living room, kitchen and bath, as well as a king-size loft with dormer windows reachable by a sliding ladder. It is among more than two-dozen floor plans the company currently offers.

Angstadt said he built the model for off-the-grid living. “You could park it in the middle of the woods.”

Hidden beneath the kitchen counter are a battery pack, a tankless hot-water heater and a 30-gallon water tank. Cooking is done by propane; the toilet is composting.

Powered by generator or battery, the diminutive domicile can also be built to utilize solar power. And if you prefer to park your tiny home on property with a water and electricity source, there are hook-ups for that.

Demand for tiny homes and the simplified lifestyle often associated with them is growing, said Ryan Mitchell, managing editor of thetinylife.com.

People are drawn to the “tiny house movement” in part because of the considerably lower cost of living, Mitchell said.

“It’s at a price point where people can save up and pay cash and have a home outright,” Mitchell said. “That’s a pretty big draw, after the recession and so many people losing their homes.”

Angstadt’s tiny homes start at $20,500. Geared toward those who prefer to do it themselves, the price includes an 8- by 18-foot trailer, a sheathed frame and shingle or metal roof. (You add the siding, windows, interior walls, flooring, insulation, plumbing and electric.)

A fully finished, 8- by 24-foot house with a refrigerator, electric stove, shower stall, toilet and other amenities can cost $65,000 or more. All plans are customizable.

While the price tag intrigues some, other buyers and builders of tiny homes downsize for environmental reasons, Mitchell said.

The houses also appeal to those in search of a minimalist lifestyle.

These days, “everyone has to be really busy,” Mitchell said. But some have realized that’s not for them.

“They want to have time to themselves, to spend time with friends and family and pursue their passions and hobbies,” he said. “Tiny houses afford them flexibility and options to live a life that is more on their terms. That’s pretty appealing to a lot of people today.”

Angstadt said he tried to think of everything when coming up with his own line of tiny houses, including wireless Internet capability. On Monday, a portable air conditioning unit circulated cool air through home. But there’s space on the wall over the couch for a mounted cooling unit; on the opposite wall, behind a piece of art, is everything you need to hang a flatscreen television.

All of Tiny House Building Company’s abodes are certified by the Recreational Vehicle Industry Association, he said, meaning you can take them into most RV parks.

But the tiny houses are not RVs, Angstadt said.

“We build professionally and under code,” just as if they were constructing a regular house. They use real wood and quality insulation that nearly silences Lafayette Boulevard traffic just feet away.

The trailers on which the little houses sit are constructed from steel because, Angstadt said, “a house is only as good as its foundation.”

( Tiny House Building Company also sells the trailer sans home, if you prefer to construct your own upon it.)

The homes can be pulled from place to place or permanently parked. A 1-ton truck can haul the larger of the tiny homes; a Ford F-150 or equivalent can pull the 18-foot houses, he said. If you don’t plan to travel with your wee dwelling–or just don’t want to pick it up–the company can deliver it.

Soon after building his first model to see whether there would be any interest, Angstadt said, he sold two.

“Locals are just learning what they can do” with tiny houses, Angstadt said. “If I throw a sign up for an open house, 80 or 90 people will stop in.”

Many are longtime apartment dwellers who have saved money but don’t want to invest in a house that will take 30 years to pay off, he said.

Anthony Pulzone, who lives in Westmoreland County, spotted the tiny home model a couple of weeks ago during his regular work rounds through Fredericksburg. He said he was hoping it would still be there when he came through again on Monday.

It was. He pulled his work truck over to take a closer look.

Pulzone said he and his wife recently sold their longtime home and moved into a 28-foot tiny house of their own on Long Pond just off the Potomac River.

“What really caught my eye,” he said of the model, “was the second level.”

Pulzone snapped some pictures inside and out to show his wife, and left with a pricing sheet.

“Folks who were buying big homes before have realized they don’t need all that stuff,” Angstadt said. “The response has been overwhelming.”