Home Health The grown-ups’ guide to a stinking cold 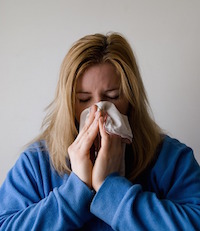 Must we go to a doctor to clear up a case of the cold? I reckon no one in their right mind wants to go down to the doc’s office. It’s full of sick people and if you have a cold why would you want to spread it? What’s the doc going to say?

I suppose in serious cases, or if your immunity is compromised, perhaps a trip to a medical center might be necessary, but in normal cases, there are a number of ways to battle this common illness.

As we all know, cold symptoms typically include nasal congestion, runny nose, aches and pains, sneezing, and a scratchy-sore throat, accompanied by general discomfort with little or no fever and a lot of grumping.

So if you’ve discovered that you have a cold, the first thing to do is rest. No, really. Rest. Don’t battle on through it. Try and steal some sleep. I get that most of us never take time off with a cold and turn straight to the meds, but rest really is the best cure. OK, lecture over. You’re not going to rest are you?

Drink liquids like water juices or tea. This will replace fluids lost during the illness. In addition, fluids help keep your throat moist and trap cold viruses, sending them back to the stomach to be destroyed by the stomach’s digestive acids. Juices will also prevent the lining of the nose and throat from drying out and loosens mucus so it can flow out of your body. Avoid coffee and other caffienated drinks, as well as alcohol, as they can lead to dehydration. (You’ll probably ignore that, too. But don’t mix mega doses of alcohol and medicine, especially not anything containing acetaminophen as that stuff will shut your liver down stat, and you’ll be the first person to die of a cold since the invention of the roof.)

Steam is an awesome weapon against colds and other illnesses. After you take a hot shower, keep the door closed with a towel under the crack, and breathe the hot,steamy air for a few moments. (Don’t do it too often or you’ll be watching the paint start to peel off the ceiling.)

If you’ve no time for the shower steam, take a little time to fill the kitchen sink with steaming hot water, breathe in with a towel over your head. The warm, moist steam will loosen congested airways, and ease sore throats and muscle aches. As your body relaxes, it will make it easier to get sleep, and like I said, rest is imperative when fighting a cold.

Gargle with salt water, antiseptic mouthwashes can be too hard for sore throats.

Cold viruses are passed along when a person rubs their nose or mouth after shaking hands with someone with a cold or from breathing in contaminated droplets that have been sneezed or coughed into the air. So wash your hands often. Do not touch your eyes, nose or mouth after washing. (Or door handles, light switches, phones, keys or cupboards.)

Another way to help clear a congested chest is through a fomentation. Heat a towel, and moisten it slightly, and put it on the affected chest…this will help loosen the mucus that may have clogged your chest.

A small dab of mentholated salve under your nose can open breathing passages and help restore the irritated skin at the base of the nose.

And there’s always a homemade remedy. Try this one. It tastes terrible, but if you have a persistent cough it’s the business.

Mix and take by the teaspoon

I was desperate for some relief. It worked and I got a good night’s sleep. I have been recommending it to others ever since, and many have confirmed my positive results. No one liked how it tasted.