Home Way of Life Putting the ‘fun’ in funeral

Death hits us hard. Grief is a poor partner in decision making as it prevents clear thinking and encourages sentimentality. The independent, self-reliant way is to plan all aspects of death in advance, so the process unfolds without unpleasant – and expensive – surprises.

The funeral business is close-knit and organized. It conspires to have the bereaved pay as much as possible for the embellishments of death and attempts to make you feel guilty if you scrimp on them. In tough economic times, you might want to look at these costs and plan in advance for a more pocketbook-friendly exit from the world.

I’m comfortable enough with the idea of death to keep the body of a loved one in my home. It’s what happened all the time just a couple of generations ago. If you feel the same way, you could hold a viewing in your home. Keeping a deceased person at home is legal in all states except Connecticut, Delaware, Indiana, Louisiana, Michigan, Nebraska, New Hampshire, New Jersey, and New York. A viewing or wake at your own home may be more comforting than holding it at an unfamiliar funeral home – especially for the elderly, who tire easily.

Don’t let the funeral parlors rip you off. Get a coffin made yourself.

Coffins can be an enormous expense. Funeral parlors are governed by a code of ethics which obliges them to show you all casket prices but it is not unknown for them to say that the $500 casket is out of stock

but the fancy $2500 one is right here and ready. To solve this problem, have your casket pre-made. Save yourself the aggravation – and get some nice furniture you can use in your lifetime.

There used to be a carpenter in Port Townsend, WA, named Outhouse Charlie who would make you a custom-built coffin you could live with. During your lifetime you’d use it as a gun cabinet, a bookcase, a blanket box, or whatever you specified to him. But when you died, your furniture doesn’t become a problem for the heirs – it turns into your very own coffin. Charlie suggested such quaint touches as fixing some pin-ups or family photos on the inside of the lid and having a “nailing down” ceremony as a part of the send off. If you have a knack with wood – why not try this yourself? You’ll get a useful piece of furniture you can use, and you’ll limit the final expenses when the time comes.

For an even better deal, try the range of cardboard caskets at www.eeternity.com. Their caskets meet Federal Trade Commission regulations for an “alternative container”, and their models look like real coffins but can be put together without tools and will burn or biodegrade quickly. Try not to look like office waste!

Or have some fun with a Creative Coffin  where you can reference a memory of your loved one in humor or affection like this British Police box here. Doctor Who fans would love it. Unfortunately they can’t ship to the US, but how about you make one yourself? 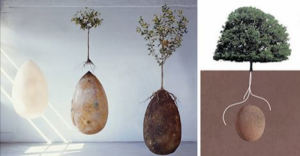 Or, if the local rules allow it, how about an organic tree pod burial? The very literal interpretation of life after death – as you would be food for a tree. The concept behind the Capsula Mundi project uses an organic, biodegradable burial pod that literally turns a person’s remains into nutrients for a beautiful tree growing directly up above.

Don’t believe the myths of the funeral homes and undertakers: Embalming isn’t required in any circumstances and it isn’t “more hygienic”.Embalming is required by some funeral companies, but certainly not by the government. And only three states – Alabama, Alaska, and New Jersey – forbid transporting un-embalmed bodies across state lines.

As with all things, the devil is in the detail. You must plan everything ahead of time, it’s a kindness to those left behind and it will ensure that your wishes are fulfilled.

Where there’s a Will, there’s an unhappy attorney

We all die at some point and you need to make a will before that happens.

Incredibly, half of Americans haven’t drawn up a will. Without a will, your family is left to slug it out with the courts – and possibly themselves – and your beneficiaries will include the lawyers! So check this out and get on with making your own will.