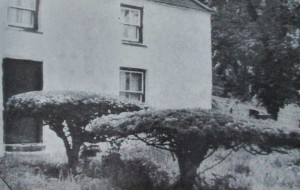 Hi, Kelly here. I hail from a small celtic island where everything had to be created from locally available materials until the late 19th century when the introduction of a regular steam ferry gave the inhabitants access to products of the industrial revolution!

Fortunately, some of the “old ways” were preserved in folklore, like the Foxfire books of the Appalachians. This one is a great trick for planting any seeds you want to grow in a line or pattern of your choosing. You’ll have to replace (or make) your straw rope, but paper or other organic materials would rot down just as well. I would think that shredded paper could be twisted into a good alternate. Here the farmers were creating boundary hedges, but I can see that garden designers could use this to beautiful effect with flower seeds.

“I would like to speak about the drine skeg or hawthorn hedge, which, although not recognised by law as a boundary hedge, is largely used to separate fields, especially in the lowlands. The planting of these is of special interest. The hawthorn seeds or skegs were gathered in autumn and during the long winter evenings a ball of straw-rope or suggane was taken and, starting at one end with a peg of wood shaped like a marline-spike, a hole was made in the rope and a skeg was dropped in. This was continued at the distance of a closed hand (about four inches) all along the rope and the rope again made into a ball.

When it was decided to plant a thorn hedge, a straight trench about four or five inches deep was scraped in the required position. The straw rope was tethered at one end and rolled along the trench, pulled taut and pegged down at the other end. The trench was then filled in and tramped well down. The skeg remained dormant in the ground for one year and germinated in the second; this gave time for the suggane to decay and so provided a comfortable bed of decayed vegetable matter for the tiny roots. It would be impossible to find a more simple or ingenious method of planting a hedge, where you have every plant an equal distance apart, rooted at the same depth and in a perfectly straight line.” 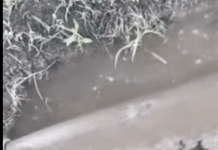 Cleaning a culvert with a tire and tow