Chagas disease is named after the Brazilian physician Carlos Chagas, who discovered the disease in 1909. It is caused by the parasite Trypanosoma cruzi, which is transmitted to animals and people by insects and is found only in the Americas (mainly, in rural areas of Latin America where poverty is widespread).

Chagas disease, or American trypanosomiasis, is caused by the parasite Trypanosoma cruzi. Infection is most commonly acquired through contact with the feces of an infected triatomine bug (or “kissing bug”), a blood-sucking insect that feeds on humans and animals.

The only areas of the United States not at risk from Chagas are the northern regions, including New England and New York state.

In the United States, Chagas disease is considered one of the neglected parasitic infections (NPI), a group of five parasitic diseases that have been targeted by CDC for public health action.

Chagas disease has an acute and a chronic phase. If untreated, infection is lifelong. Changas has no vaccination but is very curable. Treatment is nearly 100 percent effective, but only if the disease is diagnosed in time.

Acute Chagas disease occurs immediately after infection, may last up to a few weeks or months, and parasites may be found in the circulating blood. Infection may be mild or asymptomatic. There may be fever or swelling around the site of inoculation (where the parasite entered into the skin or mucous membrane). Rarely, acute infection may result in severe inflammation of the heart muscle or the brain and lining around the brain.

Following the acute phase, most infected people enter into a prolonged asymptomatic form of disease (called “chronic indeterminate”) during which few or no parasites are found in the blood. During this time, most people are unaware of their infection. Many people may remain asymptomatic for life and never develop Chagas-related symptoms. However, an estimated 20 – 30% of infected people will develop debilitating and sometimes life-threatening medical problems over the course of their lives.

In endemic areas of Mexico, Central America, and South America improved housing and spraying insecticide inside housing to eliminate triatomine bugs has significantly decreased the spread of Chagas disease. Further, screening of blood donations for Chagas is another important public health tool in helping to prevent transfusion-acquired disease. Early detection and treatment of new cases, including mother-to-baby (congenital) cases, will also help reduce the burden of disease.

To kill the parasite, Chagas disease can be treated with benznidazole and also nifurtimox. Both medicines are almost 100% effective in curing the disease if given soon after infection at the onset of the acute phase. However, the efficacy of both diminishes the longer a person has been infected.

Treatment is also indicated for those in whom the infection has been reactivated (for example, due to immunosuppression), for infants with congenital infection, and for patients during the early chronic phase. Infected adults, especially those with no symptoms, should be offered treatment because antiparasitic treatment can also prevent or curb/halt disease progression. The potential benefits of medication in preventing or delaying the development of Chagas disease should be weighed against the long duration of treatment (up to 2 months) and possible adverse reactions (occurring in up to 40% of treated patients).

Benznidazole and nifurtimox should not be taken by pregnant women or by people with kidney or liver failure. Nifurtimox is also contra-indicated for people with a background of neurological or psychiatric disorders. Additionally, specific treatment for cardiac or digestive manifestations may be required.

There is no vaccine for Chagas disease. Vector control is the most effective method of prevention in Latin America. Blood screening is necessary to prevent infection through transfusion and organ transplantation.

Originally (>9000 years ago), T. cruzi only affected wild animals. It later spread to domestic animals and people. The large reservoir of T. cruzi parasites in wild animals of the Americas means that the parasite cannot be eradicated. Instead, the control targets are elimination of the transmission and health-care access for the infected and ill population. 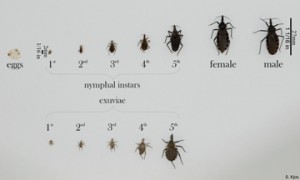 T. cruzi can infect several species of the triatomine bugs, the majority of which are found in the Americas. Depending on the geographical area, WHO recommends the following approaches to prevention and control:

In the United States and in other regions where Chagas disease is now found but is not endemic, control strategies are focused on preventing transmission from blood transfusion, organ transplantation, and mother-to-baby.

Complications of chronic Chagas disease may include:

In people who have suppressed immune systems (for example, due to AIDS or chemotherapy), Chagas disease can reactivate with parasites found in the circulating blood. This occurrence can potentially cause severe disease.