Home Health Fitness What do you ACTUALLY know about melatonin? 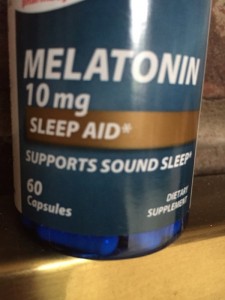 I have problems sleeping, so like many Americans I have turned to non-narcotic options that are available over the counter from any drugstore.

For years, my go-to option was Simply Sleep, which is also Benadryl and is the anticholinergic medication called diphenhydramine. Then I got spooked by the research that suggested while occasional use is OK, long-term use may contribute to dementia. (We covered it back in May, )

For a while I didn’t use anything. I found that when I took no sleep aids at all, I did sleep well occasionally but it only took a light noise to awaken me at 3am and I wouldn’t sleep again.

Recently the lack of sleep began to get to me. So I picked up a bottle of melatonin. Assuming that it’s a safe I bought the 10mg tablets and took one as instructed. The first time I felt groggy the next morning, after that it didn’t work for me. But it got me thinking, so I looked it up.

Melatonin is a naturally produced hormone that our bodies make when it gets dark. It’s nature’s way of making us sleepy. That’s why we take it to get our circadian sleep rhythms under control. Blood tests show virtually no melatonin in the system during daylight hours but the level climbs as night falls (Which is why doctors recommend you dim your lights when you take melatonin as a sleep aid. Bright lights counter the effects. Fun fact: melatonin is nicknamed  the “Dracula of hormones” – it only comes out in the dark.) Research on melatonin is inconclusive and some scientists suggest that realigning circadian rhythms could also be done by exposure to sunlight.

The Squirrel says: Did you know it’s the only hormone that can be sold without a prescription? That’s because it naturally occurs in some foodstuffs so the U.S. Dietary Supplement Health and Education Act of 1994 allows it to be sold as a dietary supplement. The FDA decided not to regulate it.

Because it is not categorized as a drug, synthetic melatonin is made in factories that are not regulated by the FDA. Listed doses may not be controlled or accurate, meaning the amount of melatonin in a pill you take may not be the amount listed on the package. Most commercial products are offered at dosages that cause melatonin levels in the blood to rise to much higher levels than are naturally produced in the body. Taking a typical dose (1 to 3 mg) may elevate your blood melatonin levels to 1 to 20 times normal. National Sleep Foundation.

But there are also no official guidelines and most of us seriously overdose. Take my 10mg, apparently the medical dose could be between .3mg and 1mg. I’m self-medicating by taking over ten times the usually prescribed dose. (Mayo Clinic has some people on doses as high as 20mg but this is short term and extreme.)

MIT research from 2001  pronounced that the .3 mg dose yielded the best results, particularly by improving sleep efficiency during the second and third phases of the three sleep cycles. The 3 mg dose was found to remain in the body beyond waking, creating daytime tiredness.

Although I couldn’t find any records of melatonin poisoning, medical sources say that because there is no data doesn’t mean there’s no risk. Overdosing on any hormone is generally considered a bad thing.

Suggestions for sleep aids will be gratefully received in the Comments section below!