Home Health Doctors look down on herbal remedies. Why? 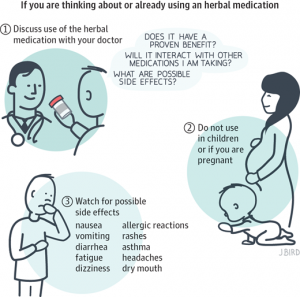 This is from the March 2016 issue of the Journal of the American Medical Association. As usual, the establishment medical opinion favors pharmaceuticals over herbal remedies. They list many of the contraindications of herbal remedies but skirt around the benefits. There are lots of warnings here, some sensible, some uber-cautious. And while they talk about herbal remedies lacking FDA approval, let’s remember that Accutane, Darvon, Palladone, Quaalude and Vioxx were all once approved by the Administration and they all had horrible side-effects. Many cultures have been using herbal remedies for millennia and swear by them to this day. Where do you stand on this?

Herbal medications are commonly used in both adults and children.

There are numerous concerns related to the use of herbal medicines because unlike conventional medications, they are not regulated by the US Food and Drug Administration and manufacturers do not have to prove the safety and efficacy of herbal medications before they are made available to the public.

ARE HERBAL MEDICATIONS BENEFICIAL?
Herbal medications are rarely tested by high-quality research, and clear proof of beneficial effects is often lacking. Only the use of cranberry for prevention of recurrent urinary tract infections in women is supported by some scientific evidence. The efficacy of other commonly used herbal medications has not been proven. For instance, the beneficial effect of St John’s wort for short-term treatment of mild to moderate depression is still debated. Use of Echinacea for treatment of colds is not supported by scientific data. Similarly, there is questionable evidence on the efficacy of ginseng, which is often used to improve physical and cognitive performance. Ginkgo biloba has been marketed to improve memory and cognitive performance, but there is no consistent scientific evidence to support this use. The efficacy of garlic in lowering cholesterol levels, treating hypertension, and reducing cardiovascular risk is uncertain. Furthermore, no beneficial effect has been attributed to ginger for treatment of nausea or to soy for control of menopausal symptoms.

POSSIBLE NEGATIVE EFFECTS OF HERBAL MEDICATIONS
Herbal medications can mistakenly be perceived as safe because they are natural products. They may produce negative effects such as allergic reactions, rashes, asthma, headaches, dizziness, agitation, dry mouth, seizures, fatigue, tachycardia, nausea, vomiting, and diarrhea. Severe side effects have also been reported. Cases of hepatotoxicity (liver damage) were reported for kava kava and life-threatening anaphylactic reactions have been reported for most herbal medications. Herbal medications may also modify the effect of conventional medications. For example, cranberry and Ginkgo biloba should be used cautiously by people who take blood-thinning medications (such as warfarin or aspirin) because of an increased risk of bleeding. St John’s wort interferes with the effect of many medications, including birth control pills, antidepressants, and anti-HIV medications. Also, the active ingredients of many herbal medications are not readily known, and contamination has been reported.

Always consider new symptoms as a potential effect of herbal medications. If you experience a new symptom, stop the medication, report the side effect to your doctor, and consider reporting it through the Safety Reporting Portal (www.safetyreporting.hhs.gov).