From an economic perspective, too much government spending is harmful to economic performance because politicians and bureaucrats don’t have very good incentives to spend money wisely.

More specifically, labor and capital will be misallocated because people in government generally are guided by political motivations.

By contrast, there’s a bottom-line incentive in the private sector to use resources wisely. This generates the most prosperity for society because the only way to earn income in a free market is to produce goods and services that other people value. That’s sort of a macro perspective.

In other words,enlightened self interest (you can even call it “greed” if you prefer) is channeled productively in a free market system, as Adam Smith observed several hundred years ago.

Now let’s look at a visual perspective, as illustrated by this image I saw on Reddit‘s libertarian page. 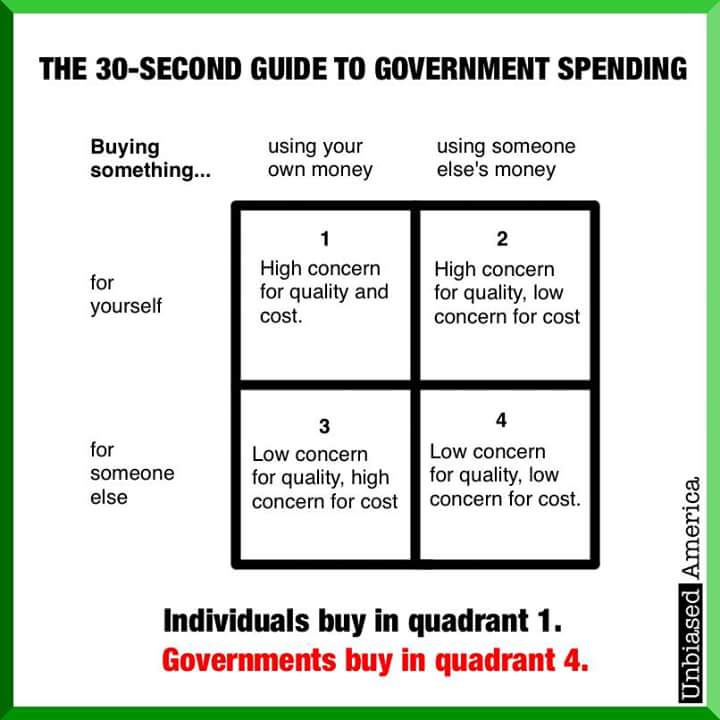 And if you want to see the late Milton Friedman discuss this concept, here’s a video for your viewing pleasure.

I’ll simply add a few observations. One of the reasons I often compare market-oriented nations and government-oriented nations is to highlight how countries are more likely to become prosperous when most resources are allocated by private decisions rather than political decisions.

In other words, South Korea out-performs North Korea because its economy is largely driven by decisions in quadrant 1.