The Transportation Security Administration has become infamous over the years for things that it doesn’t allow on planes.

Consider these examples of the Keystone Cops in action.

But now the TSA is moving with such tortoise-like inefficiency that even the passengers without plastic hammers and kitty cat keychains aren’t getting on planes.

Our cousins across the Atlantic are amused by the TSA’s incompetence. Here are some blurbs from a story in the UK-based Telegraph.

Circus performers have been brought in to cheer up delayed passengers at San Diego International Airport, where travellers are missing flights because the Transportation Security Administration (TSA) is failing to get people through security quick enough. 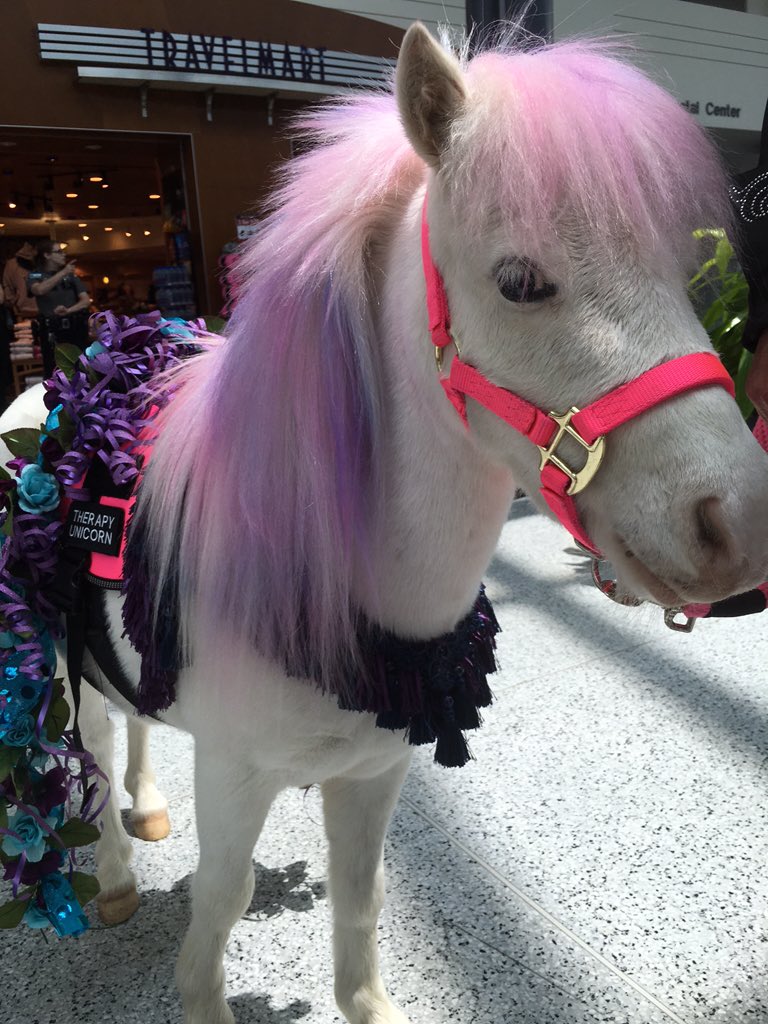 …San Diego isn’t the only airport gripped by TSA chaos – queues are winding around terminals across the country as the busy summer season begins. Neither is it the only airport to hire entertainment – Cincinnati/Northern Kentucky International Airport has been trying to stabilise the situation with miniature horses. Yes, horses. …The so-called “therapy unicorns” have been supplied by the Seven Oaks Miniature Therapy Horses programme in nearby Ohio. …Other airports have laid on live music and free lollipops to lighten the mood. It will take more than a lollipop to assuage American Airlines, though, which claims 6,800 of its passengers missed their flights in one week due to the delays.

Surely there must be a better response than clowns and unicorns, right?

As you might expect, the answer is less government.

…critics claim the tax-payer funded agency is inefficient and should be replaced by a private company.

Could that really be the solution?

According to a report from the BBC, some major airports are thinking of escaping from the nightmare of TSA incompetence.

The Port Authority of New Jersey and New York and the Atlanta Hartsfield-Jackson airport have both threatened to privatise their passenger screening processes.

And we already have private screeners at more than 20 airports, including major cities such as Kansas City, Orlando, Rochester, and San Francisco.

But there should be a lot more if this 2011 story from MSNBC is any indication.

“The TSA has grown too big and we’re unhappy with the way it’s doing things,” said Larry Dale, president of Orlando Sanford International Airport. “My board is sold on the fact that the free enterprise system works well and that we should go with a private company we can hold directly accountable for security and customer satisfaction.” Dale isn’t alone. Airports in Los Angeles, the Washington, D.C. metro area and Charlotte, N.C., are also considering tossing the TSA. …Rep. John Mica (R-Fla.), …chairman of the House Transportation and Infrastructure Committee, has encouraged the nation’s 200 biggest airports to opt out, calling TSA a “bloated, poorly focused and top-heavy bureaucracy.”…When TSA was created in 2001, the Aviation and Transportation Security Act mandated that the Screening Partner Program (SPP) be adopted to allow screening by private companies under federal oversight.Five airports immediately signed up in 2002 — San Francisco International, Kansas City International, Greater Rochester International, Jackson Hole and Tupelo Regional — and eleven others…have joined since then. …So far, no airport that joined SPP has opted back into the federal screening program.

Airports go with a private company because it means workforce adaptability and flexibility.

Unlike government workers, problem employees working for contract screening companies “can be removed immediately,” noted Mark VanLoh, director of aviation at Kansas City Aviation Department. The private screening company is easier to reach, he added. “Because I am a client, I usually get a return call immediately. We are all in the customer service business, so that’s a nice thing to have.” The bottom line, said McCarron of San Francisco International, is that “we feel our passengers are as safe as at any other airport. And by allowing [the private screening company] to handle the personnel management of the screening process, the TSA staff at SFO can focus its attention on security issues.”

But much more needs to happen to make air travel pleasant and safe.

“The screening partnership program may be a step in the right direction, but ultimately, it doesn’t change the fact that people at the top are idiots. The real problem is that TSA needs to be totally rebuilt,” said aviation consultant Michael Boyd, of Colorado-based Boyd Group International. “Contracting with private screening companies offers staffing flexibility and a few other advantages,” said Robert Poole, director of transportation policy for the Reason Foundation, a free market think tank, “but the system is still very centralized and run too much by TSA.”

In other words, opting into the SPP program is a step in the right direction, but not the ideal solution.

Though even this step is difficult. Experts are concerned that TSA is dragging its feet to prevent more airports from opting for private security. Here’s some of what was writtenearlier this year.

There’s plenty of evidence that TSA airport screeners are not effective, but worse still, the agency is rigging the system to make sure it is the only option for airport security. …the Screening Partnership Program (SPP) could enhance aviation security while also supporting increased commercial activity, which are both good for the country. …SPP is a program for privatized passenger screening, where airports can “opt out” of TSA screening by contracting with a company to provide passenger and baggage screening commensurate with TSA standards and under the oversight of the federal government.

But TSA permission is needed if airports want private screeners, and that’s a problem.

TSA’s calculus on whether to grant an SPP application is based in part on costs, and the agency does this by comparing proposed costs from contractors against TSA’s estimated costs for the same service. …Private companies are incentivized to determine real costs, as those costs become an operating budget. Propose too little and the company will not make money; propose too much and the company is uncompetitive. Meanwhile, TSA is incentivized to determine costs that outcompete a private company (to protect budget and staff)… by 2011, TSA was rejecting all requests from airports to engage SPP. …TSA is doing an end-run around the free market, leveraging their unique role as competitor and application reviewer to ensure the private sector cannot participate, and the agency then shields itself from oversight.

So the TSA bureaucracy is putting its thumb on the scale to protect its turf.

Is there a silver lining to this dark cloud? Are the TSA bureaucrats at least doing a better job with security, thus perhaps balancing out the inefficiency and high costs?

In June 2015, it was revealed that TSA screeners failed 95% of the time during Red Team tests that secreted illicit items through security. …TSA cannot even meet the security standards that private companies must meet under SPP. Arguably, if TSA were a private company bidding for an SPP contract, they would be rejected in terms of costs and effectiveness.

So here’s the bottom line.

SPP yields cheaper and more flexible security operations and, as arguably the biggest benefit to the disgruntled traveling public, if the private sector screeners insult someone, infringe on their rights, or treat them less than fairly (as an endless amount of TSA horror stories reveal), they can be fired, immediately. It is extremely difficult to fire a government employee… TSA is failing in its airport screening mission while also prohibiting competition that could deliver better security and lower costs. It’s time to let private sector screeners take a shot at it.

Yup. In a sensible world, airports all over the nation would be opting out of the TSA and into the SPP.

Let’s close with some depressing analysis from Megan McArdle on what will probably happen instead. Here are some excerpts from her Bloomberg column.

The TSA is blaming inadequate staffing, but government bureaucrats always blame inadequate staffing, since agency headcount is generally a good proxy for “importance of the boss of said agency.” …The TSA has slowed down screening after last summer’s humiliating failure to detect almost any of the contraband in a security audit. …this is the essential logic of bureaucracy. The TSA will suffer terribly if a terrorist slips through with a bomb — or even if the auditors make it through with a fake bomb. On the other hand, what happens to them if there are long lines? Not much. They’ve got to be there for eight hours, so why should they care if we are too? This is why government agencies tend to be much more attuned to remote risks than the real and persistent costs they impose on the rest of us.

Especially when providing poor service will probably produce a bigger budget for the TSA!

…there’s not really any point in having the TSA. Which is a conversation worth having. …But in the history of the world, few indeed are the managers or bureaucrats who have said: “Yup, what we’re doing is useless, you should probably fire me and all my staff.” It’s pretty much inevitable that the TSA, having flunked its audit, is going to choose to impose huge burdens on airline passengers, rather than admit that it’s not actually doing all that much to keep us safe. I’d bet that in the next six months, the TSA will be rewarded for the longer lines by having its budget and headcount increased. …The end result of this cycle: a bigger, more expensive agency that still doesn’t do much to keep us safe.

Isn’t that typical. A bureaucracy getting rewarded for failure.

In a just world, we would take this advice from the Chicago Tribune

and shut down the TSA.

But don’t hold your breath waiting for that to happen.

P.S. Check out this amazing picto-graph if you want more information about the failures of the TSA.