An anthrax outbreak has overtaken the remote Yamalo-Nenets district of western Siberia killing 1,500 reindeer in a week and forcing the hospitalization of 40 people in the first epidemic of the deadly pathogen since 1941.

Officials cautioned the public that there is still some small possibility that the virulent pathogen is not anthrax saying, “As of now, there is no single diagnosis of the dangerous infection.”

The cause of the anthrax outbreak that forced 63 local residents to be relocated is believed by authorities to have been sourced to a frozen carcass of a reindeer that died decades ago but that thawed in an unseasonably warm Siberian summer causing the Bacillus Anthracis bacteria to be released.

The deadly pathogen continues to spread among the Nenet community’s reindeer causing them to die in droves as people stopped vaccinating reindeer against anthrax about a decade ago, after the region had gone half a century without any outbreaks.

It is believed to be too late for the local deer population because anthrax kills the animals within three days of infecting them, according to biology professor Vladimir Bogdanov of the Russian Academy of Sciences.

Local authorities are now puzzled as to the best way to dispose of the dead, anthrax infected reindeer. The usual method of burning the carcass possesses substantial risks this season with much of Siberia already engulfed in wildfires.

Anthrax carries a mortality rate of 25% to 80% depending on the virulence of the particular strain.

Russian officials say that due to the remote location of the outbreak and its tendency to kill its host before they can spread the infection to others that the outbreak has been contained.

Cutaneous anthrax symptoms can include: 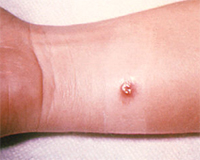 A group of small blisters or bumps that may itch

Inhalation anthrax symptoms can include:

Gastrointestinal anthrax symptoms can include:

Injection anthrax symptoms can include: