As a south Louisiana native who lived through Hurricane Katrina, I have every right to be aggravated with the national news coverage of the state’s latest natural disaster.

Due to massive flooding over the last week, one-third of the state’s parishes (called counties everywhere else) are official federal disaster areas. 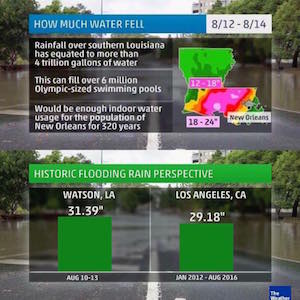 The population for those parishes is almost 2 million people. One of the hardest hit areas is Livingston Parish (home to almost 140,000 people), where local officials estimate 75 percent of the homes are completely destroyed.

And it’s not over. Some rivers haven’t crested yet, and the flood warning has been extended to parishes that haven’t seen any flooding yet. More than a third of the state could see severe flooding.

By comparison, about 70 percent of the 134,000 homes in New Orleans were damaged (not necessarily due to flooding) during Katrina. Other areas of the Gulf Coast were also hit, but the bulk of the damage was in New Orleans and its suburbs.

After around 10,000 people sought shelter in the Superdome (even though everyone had been warned that the facility would not be opened because it was not a shelter), the national media turned the disaster into a national tragedy.

Over a decade later, no matter where I travel, when I tell someone I’m from New Orleans I get questions about Katrina.

Now, with 40 percent of the state’s population in official disaster areas, there’s hardly a peep out of the national media. But I’m not mad.

I’m proud to be associated—even if only by birth—with what’s going on in Louisiana.

People are coming together and helping each other every day. People with boats—a big number down there—are rescuing people and helping on their own, without anyone asking.

They’ve been dubbed the “Cajun Navy,” and they’re yet another example of a disaster in Louisiana bringing out the best in people. Officials estimate that more than 15,000 people have been rescued, but everyone knows the real number is higher than that.

Many people are frustrated with the lack of national news coverage, and social media has been the best source for figuring out which of your friends and relatives are safe. Some articles have pointed out that the shootings in Baton Rouge and Milwaukee (and Donald Trump) garnered more attention than the flooding, and it’s impossible to argue that the media is covering this disaster the way it covered Katrina.

Maybe it’s just disaster fatigue, or perhaps it really is because there is no racism/terrorism/riot/sick entertainment component. I won’t judge, but it’s clear that a tragedy of much smaller proportion in New Orleans was a bigger story. Who, outside of Louisianans, has heard of Denham Springs or Baker?

Regardless, people should know about what’s happening there. It’s a human spirit story, a great example of people coming together to help each other out. And anyone from—or related to anyone in—these areas in south Louisiana knows better than to expect anything less.

Regular everyday people, resilient to the core, rising to the occasion, and helping out their neighbors may not make for entertaining “news,” but it says much more about human nature than whether Justin Bieber quit Instagram. Norbert Michel studies and writes about housing finance, including the reform of Fannie Mae and Freddie Mac, as The Heritage Foundation’s research fellow in financial regulations. Read his research.