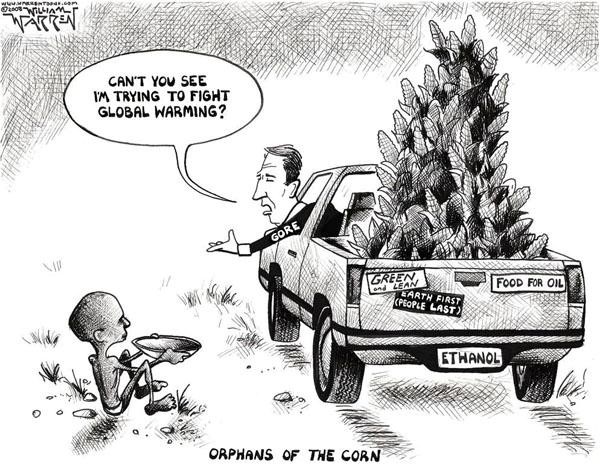 University of Michigan’s Energy Institute research professor John DeCicco, Ph.D., believes that rising carbon dioxide emissions are causing global warming and, therefore, humans must find a way to reduce its levels in the atmosphere — but ethanol is the wrong solution. According to his just-released study, political support for biofuels, particularly ethanol, has exacerbated the problem instead of being the cure it was advertised to be.

DeCicco and his co-authors assert: “Contrary to popular belief, the heat-trapping carbon dioxide gas emitted when biofuels are burned is not fully balanced by the CO2 uptake that occurs as the plants grow.” The presumption that biofuels emit significantly fewer greenhouse gases (GHG) than gasoline does is, according to DeCicco: “misguided.”

His research, three years in the making, including extensive peer-review, has upended the conventional wisdom and angered the alternative fuel lobbyists. The headline-grabbing claim is that biofuels are worse for the climate than gasoline.

Past bipartisan support for ethanol was based on two, now false, assumptions.

First, based on fears of waning oil supplies, alternative fuels were promoted to increase energy security. DeCicco points out: “Every U.S. president since Ronald Reagan has backed programs to develop alternative transportation fuels.” Now, in the midst of a global oil glut, we know that hydraulic fracturing has been the biggest factor in America’s new era of energy abundance — not biofuels. Additionally, ethanol has been championed for its perceived reduction in GHG. Using a new approach, DeCicco and his researchers, conclude: “rising U.S. biofuel use has been associated with a net increase rather than a net decrease in CO2 emissions.”

DeCicco has been focused on this topic for nearly a decade. In 2007, when the Energy Independence and Security Act (also known as the expanded ethanol mandate) was in the works, he told me: “I realized that something seemed horribly amiss with a law that established a sweeping mandate which rested on assumptions, not scientific fact, that were unverified and might be quite wrong, even though they were commonly accepted and politically correct (and politically convenient).” Having spent 20 years as a green group scientist, DeCicco has qualified green bona fides. From that perspective he saw that while biofuels sounded good, no one had checked the math.

Previously, based on life cycle analysis (LCA), it has been assumed that crop-based biofuels, were not just carbon neutral, but actually offered modest net GHG reductions. This, DeCicco says, is the “premise of most climate related fuel policies promulgated to date, including measures such as the LCFS [California’s Low Carbon Fuel Standard] and RFS [the federal Renewable Fuel Standard passed in 2005 and expanded in 2007].”

The DeCicco study differs from LCA — which assumes that any carbon dioxide released from a vehicle’s tailpipe as a result of burning biofuel is absorbed from the atmosphere by the growing of the crop. In LCA, biofuel use is modeled as a static system, one presumed to be in equilibrium with the atmosphere in terms of its material carbon flow. The Carbon balance effects of U.S. biofuel production and use study uses Annual Basis Carbon (ABC) accounting — which does not treat biofuels as inherently carbon neutral. Instead, it treats biofuels as “part of a dynamic stock-and-flow system.” Its methodology “tallies CO2 emissions based on the chemistry in the specific locations where they occur.” In May, on my radio program, DeCicco explained: “Life Cycle Analysis is wrong because it fails to actually look at what is going on at the farms.”

In short, DeCicco told me: “Biofuels get a credit they didn’t deserve; instead they leave a debit.”

The concept behind DeCicco’s premise is that the idea of ethanol being carbon neutral assumes that the ground where the corn is grown was barren dirt (without any plants removing carbon dioxide from the atmosphere) before the farmer decided to plant corn for ethanol. If that were the case, then, yes, planting corn on that land, converting that corn to ethanol that is then burned as a vehicle fuel, might come close to being carbon neutral. But the reality is that land already had corn, or some other crop, growing on it — so that land’s use was already absorbing CO2. You can’t count it twice.

DeCicco explains “Growing the corn that becomes ethanol absorbs no more carbon from the air than the corn that goes into cattle feed or corn flakes. Burning the ethanol releases essentially the same amount of CO2 as burning gasoline. No less CO2 went into the air from the tailpipe; no more CO2 was removed from the air at the cornfield. So where’s the climate benefit?”

Much of that farmland was growing corn to feed cattle and chickens — also known as feedstock. The RFS requires an ever-increasing amount of ethanol be blended into the nation’s fuel supply. Since the RFS became law in 2005, the amount of land dedicated to growing corn for ethanol has increased from 12.4 percent of the overall corn crop to 38.6 percent. While the annual supply of corn has increased by 17 percent, the amount going into feedstock has decreased from 57.5 percent to 37.98 percent — as a graphic from the Detroit Free Press illustrates.

The rub comes from the fact that we are not eating less. Globally, more food is required, not less. The livestock still needs to be fed. So while the percentage of corn going into feedstock in the U.S. has decreased because of the RFS, that corn is now grown somewhere else. DeCicco explained: “When you rob Peter to pay Paul, Peter has to get his resource from someplace else.” One such place is Brazil where previous pasture land, because it is already flat, has been converted to growing corps. Ranchers have been pushed out to what was forest and deforestation is taking place.

Adding to the biofuels-are-worse-than-gasoline accounting are the effects from producing ethanol. You have to cook it and ferment it — which requires energy. In the process, CO2bubbles off. By expanding the quantity of corn grown, prairie land is busted up and stored CO2 is released.

DeCicco says: “it is this domino effect that makes ethanol worse.”

The study looks at the period with the highest increase in ethanol production due to the RFS: 2005-2013 (remember, the study took three years). The research provides an overview of eight years of overall climate impacts of America’s multibillion-dollar biofuel industry. It doesn’t address issues such as increased fertilizer use and the subsequent water pollution.

The conclusion is that the increased carbon dioxide uptake by the crops was only enough to offset 37 percent of the CO2 emissions due to biofuel combustion — meaning “rising U.S. biofuel use has been associated with a net increase rather than a net decrease in CO2emissions.”

Instead of a “disco-era ‘anything but oil’ energy policy,” DeCicco’s research finds, that while further work is needed to examine the research and policy implications going forward, “it makes more sense to soak up CO2 through reforestation and redouble efforts to protect forests rather than producing biofuels, which puts carbon rich lands at risk.”

Regardless of differing views on climate change, we can generally agree that more trees are a good thing and that “using government mandates and subsidies to promote politically favored fuels de jour is a waste of taxpayers’ money.”

The author of Energy Freedom, Marita Noon serves as the executive director for Energy Makes America Great Inc., and the companion educational organization, the Citizens’ Alliance for Responsible Energy (CARE). She hosts a weekly radio program: America’s Voice for Energy—which expands on the content of her weekly column. Follow her @EnergyRabbit.