Home Editor's Picks UK government warns Earth will only have 12-hour warning to deal with...

We’ve been warning about it for ages. We must get ready for a solar or terrorist EMP event that could obliterate everything electrical and bring life as we know it to a screeching halt. That’s why we at Self-Reliance Central are constantly reminding you how to make Faraday cages, or use your microwave to protect phones and laptops, and how to use non-computer and off-the-grid communications devices for staying in touch with people and whatever services you might need. Now, we must also worry about nation-state cyber attacks and as the UK Government points out, Mother Nature.

Just look around you. In the Middle East the shameful Iranian nuclear deal has come to pass leaving that fundamentalist state all set to launch nuclear warheads. Once they go live, expect other nations to crank up their centrifuges. The US and Russia are embarking upon a new nuclear arms race. North Korea is run by a nut job who really could push his red button and launch an attack on South Korea or worse, the west coast of the USA. In another war, one with a level playing field where no amount of military hardware can help the United States is losing. We are arguably the most vulnerable nation on the planet to cyber- attack.  We have an immensely target-rich nation, filled with decades old critical infrastructure woefully ill-equipped to defend against our enemies. A few well placed viruses and as the hacking on the formidable NSA this week demonstrates, the nation could grind to a halt.

And in this document from the UK government you’ll see that there is also a big threat from nature. They anticipate that we are massively unprepared to deal with a naturally occurring solar flare, which would have the same effects as nuclear powers detonating an EMP in low earth orbit. They warn that we would have just 12 hours warning of a naturally occurring event.

Self-reliant people SHOULD find 12 hours more than enough for their needs. But as this UK Cabinet document (produced at the highest level under the direction of the Prime Minister) warns, a solar explosion or flare, could create a massive electro-magnetic pulse (EMP) that could fry anything connected to the grid or switched on (computers and radios working on batteries, for instance.)

That’s everything! Fridges, cookers, computers (not that there will be an internet for a while), A/C and heating units, washing machines, driers, new cars, public transport, planes and airports (anything flying at the time will probably crash, let’s hope we really get 12 hours notice), government offices (yeah, shame), banks and ATMs, hospitals…the  list is endless.

And according to the UK government, they are massively under-prepared for this eventuality. Even though the first recorded incident of the “Carrington Effect” was observed in the UK in 1859 by Richard Carrington, an astronomer who witnessed a solar coronal mass ejection hitting the Earth’s magnetosphere which induced one of the largest geomagnetic storms on record.

Aurorae were seen around the world, those in the northern hemisphere even as far south as the Caribbean; those over the Rocky Mountains were so bright that their glow awoke gold miners, who began preparing breakfast because they thought it was morning.

People who happened to be awake in the northeastern US could read a newspaper by the aurora’s light. The aurora was visible as far from the poles as Sub-Saharan Africa Monterrey and Tampico in Mexico, Queensland, Australia, Cuba and Hawaii. 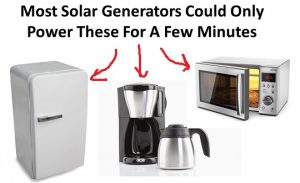 So, when it happens, it’s going to be a big deal. And every year we have a 1% chance of it happening. And nowadays the impact would be catastrophic. So we mean it. You have to become more self-reliant. You need canned and tried foods, alternate laundry and bathing solutions. Off-the-grid power, cooking and communications systems. You need to be proficient in self-defense, medicine, first aid, repairs and scavenging.

Have a look at this document. It reveals how seriously the British are taking the threat. We should, too.