As prepared, self-reliant people we’re willing to consider anything when it comes to survival, but eating bugs is a line many of us are not prepared to cross.

I remember as a child being offered chocolate-covered ants as a great treat but by the time I was old enough to get my head around the concept they were unavailable. The Government had become more interested in getting bugs out of my food than into the food chain.

Insects have served as a human food source for tens of thousands of years and may be part of our toolkit in the future in helping solve global food security challenges. (USDA blog) Today, insect eating is rare in the developed world but remains a source of food for people in developing countries in Central and South America, Africa and Asia. According to the Food and Agricultural Organization of the United Nations, 1,900 different insect species are consumed by 2 billion people in more than 80 countries across Asia, Africa and the Americas.

There are many advantages to having insects as food. Insects contain more protein and are lower in fat than traditional meats, and contain a number of micronutrients critical for human well-being. Because of their incredible physiological efficiency, insects require significantly less food to develop on. Insects save a substantial amount of energy and natural resources by their ability to get their heat from the surrounding environment. The environmental impact of insects is also significantly minimal. Finally, their reproduction rate is much higher, making them much easier to raise.

In temperate zones, insect farming is performed largely by family-run enterprises that rear insects such as mealworms, crickets and grasshoppers in large quantities, mainly as pets or for zoos. Some of these firms have only recently been able to commercialize insects as food and feed, and the part of their production intended for direct human consumption is still minimal.While the insects themselves can be consumed, a popular way to incorporate them into your diet is to bake them and grind them into a flour or paste. While it appears to be the dream on One-World governments that we consume insects, it’s more likely farmed insects will become animal feed.

From ants to beetle larvae – eaten by tribes in Africa and Australia as part of their subsistence diets – to the popular, crispy-fried locusts and beetles enjoyed in Thailand, it is estimated that insect-eating is practised regularly by at least 2 billion people worldwide. More than 1 900 insect species have been documented in literature as edible, most of them in tropical countries. The most commonly eaten insect groups are beetles, caterpillars, bees, wasps, ants, grasshoppers, locusts, crickets, cicadas, leaf and planthoppers, scale insects and true bugs, termites, dragonflies and flies.

However, if you do need to eat them remember that harvesting bugs is not usually about collecting them from the wild. In many cases you don’t know what they ate last so you are opening yourself up to infection of allergic reactions from whatever is in the belly fat insect. Cultures that consume insects from the wild mostly feed them grain, or keep them in screened boxes for a few days, to clean them out and ensure that anything bad has passed through them before human consumption.

Some bugs are good from the get go. Honey bee larva has eaten royal jelly and pollen and should be OK. Larvae that live on non-poisonous plant species should be OK. Grasshoppers seems to be popular wherever insects are eaten.

In Japan, grasshopper harvesting is connected to the rice harvest. Collection occurs in the morning, when the grasshoppers are wet from the morning dew. The grasshoppers are kept alive for one night after they are collected to allow time for the faeces to be expelled. The next day they are fried or boiled and the legs are removed, as these are not suitable for eating. After being sun-dried, the grasshoppers are cooked in soy sauce and sugar. They are eaten in the autumn as a side dish or snack. Some people store them for up to a year. However, the harvesting and consumption of grasshoppers in Japan has declined in recent years.

Rice-field grasshoppers are eaten in most Asian countries. In Korea, they were commonly eaten as a side dish, as a lunch-box ingredient and as a snack. Forty years ago in Thailand there was an outbreak of the patanga locust in maize. Aerial spraying of insecticide did not succeed and a campaign to promote the eating of the patanga locust to get rid of them was initiated. The grasshoppers were deep-fried, used as a cracker ingredient and fermented to make a cooking sauce. Today, the grasshopper (deep-fried) is one of the best-known and most popular edible insects in Thailand, and this species is no longer a major agricultural pest. Some farmers even grow maize crops to feed the insect, rather than harvesting the maize for sale.

The commercialization of grasshoppers is highly dependent on the region. In the Lao People’s Democratic Republic, a number of grasshopper species are collected for family consumption when clearing fields for paddy planting. Cooking is simple: the grasshoppers are salted lightly, boiled in a little water and simmered until dry. Sometimes they are stir-fried, while the bigger ones are deep-fried until crisp, like fried prawns. They can be roasted as well. Usually grasshoppers are served as a single dish and not mixed with vegetables or meat.

In Mexico, grasshoppers, commonly known as chapulines, are a popular form of street food. Although generally available at informal street stands and small-town restaurants, grasshoppers, among other insects, are now also found on the menus of more expensive restaurants, and dried packaged grasshoppers can be purchased in up-market shops.

While the majority of bugs are safe to eat, use your commonsense. Don’t eat insects that are brightly-colored; it’s Nature’s warning that they’re toxic. Don’t eat hairy or fuzzy insects because there could be stingers in there. And aside from stinkbugs which are edible, avoid foul or strong-smelling insects.

Remember, use the Army Survival Guide method to test foodstuffs you’re unsure about. Cook a tiny amount (kills bacteria), swallow it, and wait a few hours. If you don’t react, eat a bigger bit and wait again. If you don’t suffer an adverse reaction it’s probably OK.

There are some good catching and cooking tips on Backpacker.com 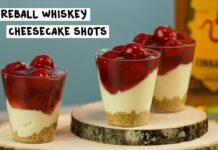 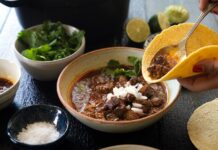 How Hispanic foods make an impact, from barbacoa to birria 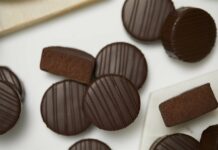