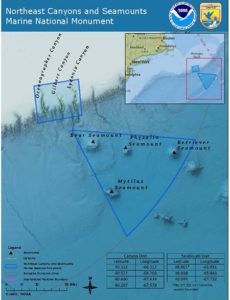 Despite a lifetime of fishing off the New England coast, Eric Reid was like a fish out of water when President Barack Obama grabbed a piece of his livelihood.

“I’m just a fish guy but I learned a lot about politics in a big hurry,” said Reid, general manager of Seafreeze Shoreside Inc., a seafood processing facility in Rhode Island.

He is referring to Obama’s September 2016 designation of nearly 5,000 square miles of ocean as the Northeast Canyons and Seamounts National Monument, using his unilateral authority under the Antiquities Act of 1906.

The area 130 miles off the coast of Cape Cod is the first national monument in the Atlantic Ocean. It’s also rife with fish that have fed New Englanders — and the New England economy — for generations.

But the monument designation makes commercial fishing off limits.

WATER GRAB: A national monument designation in the final months of the Obama administration puts 5,000 square miles of fish-rich ocean off limits to a major New England industry.

“We’re losing opportunity as we speak,” Reid told Watchdog.org. “It could easily be millions of dollars just this winter.”

Reid is part of a coalition of New England fishing organizations suing the federal government over the designation. The Pacific Legal Foundation is representing the coalition in Massachusetts Lobstermen’s Association v. Ross. PLF attorney Jonathan Wood says the economic impact is magnified when considering the shoreside businesses that have grown up around the commercial fishing industry.

“It’s not just the fishermen. It’s all the bait dealers, the mechanics and the marinas and all the businesses that only exist because there’s a commercial fishing industry,” he told Watchdog.org.

The PLF complaint argues that the president was out of line because the ocean is beyond the reach of the Antiquities Act.

President Theodore Roosevelt signed the Antiquities Act into law in 1906 to protect antiquities and artifacts from looting and prevent the destruction of Native American sites in the Southwest. Devil’s Tower in Wyoming was the first national monument created under the law. Others include familiar sites such as Fort McHenry and the Statue of Liberty.

In recent decades, the law has been used mostly to bring land, rather than historic sites, under federal control.

In 2006, President George W. Bush created the 139,797 square miles Papahānaumokuākea Marine National Monument in the Pacific Ocean. According to the National Ocean Service, it was created “to protect an exceptional array of natural and cultural resources.”

Obama more than quadrupled the size of Papahānaumokuākea in August, to 582,578 square miles — twice the size of Texas — saying in his proclamation the protection provides opportunities “including understanding the impacts of climate change on these deep-sea communities.”

All told, Obama’s 34 new or expanded monument designations covered 533 million acres of federal land and water, the most of any president.

And as with the New England fishermen, monument status limits what state and local people can do on these public lands.

Not a coral in sight

Reid says the monument in the Atlantic Ocean was purportedly to protect coral, but in parts of the protected area, there’s not a coral in sight.

“Once the designation was given to us a few days before the actual written proclamation itself, it was pretty evident to us that there was quite a bit of political pressure put in by environmental organizations to get a pretty large area closed off that made no sense if in fact corals were the target,” he said.

Wood calls it an attempt by the president to try to establish his legacy with environmental groups who wanted to stake a claim in the Atlantic Ocean, especially because the federal Council on Environmental Quality ignored work already underway by the New England Fisheries Management Council to protect coral while continuing to allow commercial fishing.

The council is one of eight established in 1976 under the Magnuson-Stevens Fishery Conservation and Management Act, which governs marine fishery management in federal waters up to 200 nautical miles from shore. The councils are charged with fostering long-term biological and economic sustainability, and include  scientists, environmentalists, fishermen and government representatives.

Reid serves on the New England council. He says his group told the president’s Council on Environmental Quality they could do a better job than a marine monument could of managing the area.

“It would be done in a much more informed manner,” he said. “There’s a lot of analysis that has to be done, National Environmental Policy Act analysis and economic analysis on what would happen to impact the industry.”

The Natural Resources Defense Council was a driving force behind the monument, a National Geographic blogger wrote in September.

“The NRDC’s push for the monument began in 2001 and ran up until … the president announced the establishment of the protected area. … NRDC created online petitions, geospatial analyses, technical research, polling events, media outreach, meetings and a letter-writing campaign,” according to the post.

A June 30, 2016 letter, for example, addressed to Obama and copied to a number of lawmakers, urged the monument’s creation.

“While the area is largely untouched and wild today, it is highly vulnerable to disturbance and should be protected now from the push to fish, drill, and mine in ever deeper and more remote places. As climate change and ocean acidification continue to affect ocean life, it also becomes more and more urgent to establish blue parks in important and relatively pristine ocean habitats such as this one,” the NRDC wrote.

Neither the NRDC nor the Council on Environmental Quality responded to Watchdog.org requests for comment on the lawsuit.

In the meantime, Wood says while there’s essentially no limit to what the president might do under the  Antiquities Act, there is irony in what the statute cannot do, such as prevent navigation in the area or laying of cables and pipelines through it.

“So they are essentially forbidding fishing that has no impact on the coral while doing nothing to prevent oil tankers from going through the area or other nations from laying telecommunications cables that actually destroys the coral,” he said.

In addition to the lawsuit, some legislative relief may be on the way for the fishermen.

Utah GOP Sen. Mike Lee vowed to repeal the Antiquities Act, following the late December creation of a 1.35 million acre Bears Ears National Monument in the southern part of his state.  That would end future unilateral monument  proclamations by presidents; but it would take additional congressional action to abolish existing designations.

Another Utah Republican, Rep. Rob Bishop, chairman of the House Natural Resources Committee, took a fact-finding trip to the New England area where he spent some time with Reid.

“We spoke for a very nice, long time,” Reid said. “Rep. Bishop is extremely well-versed in the Antiquities Act.”

Bishop, along with Delegate Aumua Amata Coleman Radewagen (R-American Samoa), sent a letter to President Donald Trump on March 7 urging him to remove all marine monument fishing prohibitions and allow fisheries to be managed through the existing regional fishery management councils.


“Using the Antiquities Act to close U.S. waters to domestic fisheries is a clear example of federal overreach and regulatory duplication and obstructs well managed, sustainable U.S. fishing industries in favor of their foreign counterparts. You alone can act quickly to reverse this travesty,” the letter read.

And on March 15, the Natural Resources Subcommittee on Water, Power and Oceans held a hearing to examine the creation and management of marine monuments.

The hearing included written testimony from Jon Mitchell, the Democratic mayor of New Bedford, Mass. Mitchell said the Port of New Bedford generates $9 billion in direct and indirect economic output each year, and encouraged Congress to return the New England Fisheries Council to its “rightful place as the critical arbiters of fisheries management matters.”

Unless the president or Congress acts, Massachusetts Lobstermen’s Association v. Ross will proceed.

“President Obama was the biggest abuser of the Antiquities Act in presidential history,” said Wood. “This marine monument is beyond the nation’s territory. The Antiquities Act simply doesn’t fit this far out.”